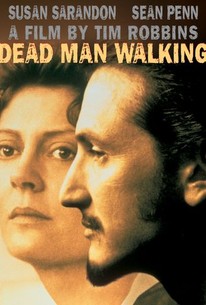 Critics Consensus: A powerful, thought-provoking film that covers different angles of its topic without resorting to preaching, Dead Man Walking will cause the viewer to reflect regardless of their political viewpoint.

Critics Consensus: A powerful, thought-provoking film that covers different angles of its topic without resorting to preaching, Dead Man Walking will cause the viewer to reflect regardless of their political viewpoint.

Critic Consensus: A powerful, thought-provoking film that covers different angles of its topic without resorting to preaching, Dead Man Walking will cause the viewer to reflect regardless of their political viewpoint.

Tim Robbins' second directorial effort (after the political satire Bob Roberts) was this drama based on a true story, which explores the issue of capital punishment. Sister Helen Prejean (Susan Sarandon) is a nun and teacher living in rural Louisiana. One day, she receives a letter from Matthew Poncelet (Sean Penn), who is scheduled to be executed soon for the rape and murder of two teenagers. After meeting Matthew, Sister Helen agrees to serve as spiritual counselor and see what she can do to stay the execution. However, Matthew's claims of innocence seem shaky at best, and it's clear he's a reprehensible, amoral racist. When it becomes obvious that Matthew's sentence will be carried out, Sister Helen offers what comfort she can to Matthew, but also tries to guide him to an open admission of the extent of his crimes and an acceptance of divine forgiveness, telling him "I want the last face you see to be the face of love." Susan Sarandon won an Oscar for her performance as Sister Prejean, and Sean Penn was similarly nominated for Best Actor as Matthew. ~ Mark Deming, Rovi

Amy Long
as Opossum Kid No. 3

Margaret Lane
as Reporter No. 1

Sally Ann Roberts
as Reporter No. 2

Alec Gifford
as Reporter No. 3

John Hurlbutt
as Reporter No. 4

Pete Burris
as Parent No. 1

Joan Glover
as Parent No. 2

Florrie Hathorn
as Parent No. 3

Lenore Banks
as Parent No. 4

Walter Breaux Jr.
as Guard No. 1

Scott Sowers
as Guard No. 2

Cortez Nance Jr.
as Guard No. 3

Adam Nelson
as Guard No. 4

Dalvin Ford
as Guard No. 5

Derek Steeley
as Guard No. 6

Jeremy Knaster
as Guard No. 7

Miles Robbins
as Boy in Church
View All

It's a strong film, made stronger by two terrific performances. Penn's acting has ruthless honesty.

It's an important film and a beautifully made film too.

Tim Robbins's balanced yet uncompromising approach refuses to judge any of the characters, including the killer (superlatively played by Sean Penn), instead giving each a fair chance to present their case with dignity and respect.

Takes us along on the reluctant, difficult, essentially spiritual journey these two unlikely people make together.

Dead Man Walking could easily be manipulative or exploitative, but it's neither. Instead, this is hard-hitting drama that neither accepts nor offers quarter.

Penn and Sarandon in their final moments together achieve a strange transcendence that makes the end of Dead Man Walking sobering and horrifying, yet oddly uplifting.

It doesn't flinch from presenting the crime committed, and yet, it's a film that undoubtedly is against capital punishment.

A powerful and provocative film -- not quite a work of art, maybe, but close enough to demand your respectful attention.

Has the distinction of including not one, but two of the greatest screen performances of all time...undeniably one of the most gut-churning emotional experiences of 1990s cinema... [Blu-ray]

A daring, objective and thought-provoking drama that inspires us to reflect on such medieval practice and discuss it for hours straight, even if it also respects those who are in favor, and it has two magnificent and greatly nuanced performances by Sean Penn and Susan Sarandon.

A soapy, longwinded drama that simply is not the moving film that warrants the praise it received. Directed by cold cocking activist Tim Robbins, his longtime partner Susan Sarandon playing the lead of Helen Prejean, and also starring Sean Penn as a fearless convict, this film bleeds for the cause of human life. This film, though moving at times, is so slanted and nauseating that the performances come off as forced and irrationally concise. It's not that the performances were bad. To the contrary, for what the movie was and for what it was obviously trying to convey, the performances were sappy enough to work. Though the film is formulaic and borderline obvious at best, it was based on the book by Sister Helen Prejean who visited and held religious counsel for Matthew Poncelet, who had murdered two people with an accomplice in cold blood. I can't fault the film for taking such sensitive subject matter and making a complex dynamic between Helen's guilt at giving Matthew religious salvation when his crimes were so abhorrent, and having the family shun her for it. Sarandon's performance is far more human than expected, as she herself is not the perfect saint or unconventional nun with an authoritative air, who always appears in these kinds of human interest films. Penn got on my nerves a bit, only because he tries to play up the convict's vulnerability to the umpth degree, and though the film is trying to show that the death penalty is wrong, and everyone is allowed their salvation, it was so schmaltzy and fake that it was only the ending that saved this film. The profile of the convict, the interviews with the families by Sister Prejean, and the feeling of the film made it a bit of a blight for emotional heart pulling films. Though it was a disappointing film for me personally, it was great to see Sarandon in such a human role.

In his second turn as a director, Tim Robbins, along with longtime partner Susan Sarandon, a bunch cof his extended family, and tons of other notable names all got together to create this: a film adaptation based on a work by Sister Helen Prejean, a nun who has spent time counseling deathrow inmates. The film soimplifies the story and focuses on Helen as she coems to know and try to help Matthew Poncelet a composite of 2-3 real life figues. Matthew (in the film) is on death row for kidnapping, then brutally raping and murdering a boy and girl out near some lover's lane somewhere along with a friend of his. The film follows Sister Helen as she tries to help Matthew get an appeal or a lesser sentence, feeling that, though he may be guilty, he isn't deserving of the death penalty. Yes, the film does ultimately have a bias concerning capital punishment, but it also presents mutltiple and well developed viewpoints of the issue, and makes a good case for both. It does have it's bias, but it is also more subtle than I expected it to be. I figured it would be very blunt and bludgeon the audience of the head with it's message a la The Life of David Gale (which now that I think about it may not be quiote as good as I originally thought). Given the well know npolitical views and activism of Penn, Robbins, and Sarandon, I was surprised with how the film ultimately treated the issues at hand, and am very thankful for how itr all ended up. Yes, it gets a bit heavy handed here and there, but it's hard to fault it too much since it's all done so well. The film doesn't make Matthew totally symapthetic, but it does humanize him, and the concluding scenes are very moving. I had a personal moment of joy when I realized that the song playing during the big climax as Matthew is being led to the execution room was a version of a song I sang with my choir back in high schhol. I believe it's a Swedish funeral march, but I can't remember. Okay, that little diversion aside, this is a very moving, thought provoking, and sensible cinematic treatment of a touchy subject. It isn't completely cliche free, but it is far more fresh than I was figuring it might be, and the performances are just wonderful. Sarandon won an Oscar, and Penn was nominated, and both are incredible. They bring a lot of depth to their roles, and play them very realistically. To support them are people such as R. Lee Ermey, Robert Prosky, Raymond J. Barry, and even Jack Black. All of them and the rest do a fine job fleshing out their various characters and giving life to people who, for various reasons, have strong opinions on capital punishment, and it's hard to really take sides because they all make you feel for them. I'm torn on the rating, so let's be kind and give it somewhere between a 4 and 4 1/2. This is a very stirring and emotional drama that raises good questions, answers some, but leaves it up to the viewer to really decide what it should be. Given the material, that's all I could ask for, because this is an issue where it's best to leave it open (ultimately) because it's such a slippery slope. You should give this a watch.

Like walking the last mile yourself, Tim Robbins' elegantly told tale of a convicted murderer's last days in the company of an interested stranger, a nun, deeply resonates whether you'd like it to or not. Deserved accolades for this one, and each one earned.