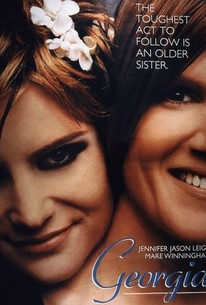 An unflinching drama of frustrated ambition and troubled siblings, Georgia examines the relationship between a self-destructive, would-be rock singer and her sister, a successful folk musician. Sadie (Jennifer Jason Leigh) is the younger, more troubled sister, a wild child with a taste for reckless behavior, from her dangerous romances to her attachments to drugs and alcohol. Hopping between low-rent clubs, Sadie struggles to make it from gig to gig, delivering rawly emotional performances that lack technical skill. Her repeated career failures drive her further into addiction, sending her life into a downward spiral. Ultimately, she is forced to seek help from her sister Georgia (Mare Winningham), who is everything Sadie is not: married, financially secure, and blessed with a smooth voice that has won her popular success. A clash of seemingly opposite personalities follows, as Georgia attempts to help Sadie without becoming damaged herself.

Thomas Kuhn
as Bartender at Larry's

Mina Badie
as Girl with Bobby

Chris Carlson
as Reporters at Larry's

Stephanie Shine
as Nurse No. 2

Jo Miller
as Herself

C.W. Huston
as Drunk in Crowd
View All

A nearly perfect movie about a nearly total screw-up.

An intense study of sibling rivalry set in the Seattle music world, Georgia excels at the expression of painfully unresolvable family conflicts.

Georgia is not a simply plotted movie about descent and recovery, but a complex, deeply knowledgeable story about how alcoholism and mental illness really are family diseases.

A painful though sadly humorous portrait of sisterhood deftly written by Leigh's mom, Barbara Turner, and directed with just-right spareness by Ula Grosbard.

Might be my favorite example of a movie that compels you toward binaristic assumptions but keeps outwitting them, with its immersed conviction in the palpable, sonic, psychological, atmospheric world that it inhabits and constructs.

In Grosbard's study of siblings rivalry, Jennifer Jason Leigh, as the more aggressive but less talented sister, again shows why she's the most brilliant actress of her generation.

Jennifer Jason Leigh's performance as the sister who lives for her turn in the spotlight electrifies this look at two very different siblings.

Examines the life and struggles of a mediocre rock singer whose high aspirations cause her needless pain.

not always on the mark, but certainly challenging

Georgia has its weaknesses, but acting is not one of them.

Great performance by Jennifer Jason Leigh makes this well worth your time.