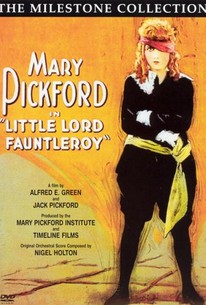 Mary Pickford stars in a double role as the young boy Cedric and his dearest mother in this classic rags-to-riches story. The Earl of Dorincourt (Claude Gillingwater) sends for Cedric, the only heir to the family fortune. Cedric leaves the poverty of his life in New York for the splendor of the monied elite in Britain. The Earl is the boy's grandfather, but he believes Cedric's mother had married his son only for his money. An imposter sets out to claim Cedric's fortune before his mother and grandfather reconcile. In a classic scene that took 15 hours to film but lasts only a few seconds, mother and son kiss each other, and the physical differences between the two characters is striking.

James Marcus
as Hobbs, the Grocer

Rose Dione
as Minna, the Adventuress

Frances Marion
as Her Son, the Pretender

Arthur Thalasso
as The Stranger, Her Husband

Mme. de Bodamere
as Mrs. Higgins, a Tenant
View All

Little Lord Fauntleroy is sure to sweep the country. It deserves to.

It's obvious that that's Mary Pickford, not a little boy. I've never understood why they had women playing boys. It's interesting how she also plays the boys mother, though. Other than that, it's a pretty good movie, the story is dramatic, funny, and cute. It's a family film, that anyone can enjoy. The ending is predictable, but most family movies have endings like that anyway.