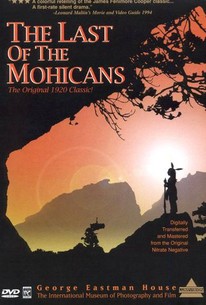 The Last of the Mohicans Photos

Maurice Tourneur was the original director on the 1920 silent version of James Fenimore Cooper's Last of the Mohicans, but he fell ill during production, obliging his talented assistant Clarence Brown to finish the job. Though contractually Tourneur could have taken full credit for the finished film, he generously shared that credit with Brown, permitting the younger man to take top billing. The story is taken virtually verbatim from the Cooper original: During the Canadian wars between the French and the English in the 18th century, Huron Indian Magua (Wallace Beery) casts his lot with the French, while Mohicans Uncas (Albert Roscoe) and Chingachgook (Tod Lorch) are loyal to the English. The film's action highlight is the massacre of Fort Henry (we are spared nothing, not even the bayonetting of babies), but its emotional peak occurs when Cora Munro (Barbara Bedford), daughter of the Fort Henry commander, threatens to fling herself off a high cliff rather than fall into the hands of the lecherous Magua. Uncas, who loves Cora from afar, is too late to effect a rescue, and the sense of genuine loss pervades the thrill-packed climax, injecting a strong sense of humanity into what otherwise might have been a straightforward adventure tale. Both the 1936 and 1990 remakes of Last of the Mohicans owe a great deal to this impressive silent version.

Theodore Lorch
as Chingachgook
View All

Critic Reviews for The Last of the Mohicans

In The Last of the Mohicans Maurice Tourneur has taken this woodsy, sentimental, old-time novel of J. Fenimore Cooper's and given it palpitating life.

If we had read the book, perhaps we should not have enjoyed the picture much as we did, for it is a perfectly thrilling picture.

Audience Reviews for The Last of the Mohicans

There are no featured audience reviews yet. Click the link below to see what others say about The Last of the Mohicans!

The Last of the Mohicans Quotes