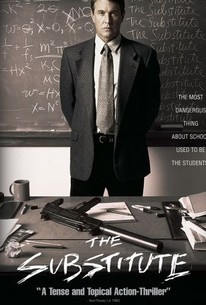 After a raid on Cuban drug runners, soldier-of-fortune Shale must become a substitute teacher for his wife after gang members forced her out of the high school. He begins his war against drugs in the Miami school and deals with gangs with all-out force as if fighting an army.

Rodney A. Grant
as Johnny Glades

Dwight Lauderdale
as Himself

Jim Warne
as Bull
View All

Critic Reviews for The Substitute

There's a sense of shrewd observation throughout The Substitute that makes it come alive and seem quite a few cuts above such usual genre fare.

An angry, white, mercenary movie out to spill blood and beat its manly chest.

There's a certain amount of camp value to this over-the-top thriller, which might as well be called Rambo Goes to High School.

The title changes, the actors change, and the superficial details of the story change, but it is always about exactly the same thing: heavily armed men shooting at one another.

Aside from a lot of only moderately-satisfying violence, The Substitute comes across as rather lame.

The entire setup is too garish to be credible.

This movie was a mess. Tom Berenger was atrocious.

This was really bad. It was over the top and completely insane.

Many of Berenger's tough-guy routines are affectively cinematic, but the pacing is off enough that the action becomes noticeably sparse and the tension alleviated too often.

Worth the time for its occasional nuggets of interesting action, and the performance by Berenger.

What begins as watchable quickly degenerates into a no-brain action flick that produces a ton of derisive laughter.

Audience Reviews for The Substitute

"You know what those damned kids in high school need nowadays, doncha? They need to be brought in line by mercenaries hired to be teachers! Tough measures for tough times! " If this thought seems rational to your way of thinking then here is the movie for you. Otherwise its ridiculous, but you haven't really lived until you've seen a bazooka used in a school corridor.

Coming along some five years after the similar themed 'Toy Soldiers', two films about schools under fire from criminals. I guess that's about as far as the similarities go though as this is an undercover mission for some mercs/Nam vets where as the other film was terrorists taking over the school. So a nasty messed up city high school is plagued by drugs, weapons and bad eggs, what is the Principle to do??. Hire a badass killer merc of course, but the thing is he doesn't know the sub is a badass killer merc. So both the yobbish kids and the staff have no clue this guy is an ex-Nam hardass. As things progress for the Berenger the merc he finds out all is not what it seems. A perfect role for the stoic butch looking Berenger who can play military types till the cows come home. Not much is required of him really, beating the kids down, killing drug dealers, being a smartass...all in a days work. His little tight nit group of mercs are a cool bunch, a young Luis Guzman, the insane William Forsythe, military action flick regular Ray Cruz and Richard Brooks. A really good team of character actors that are great fun to watch, its just a shame we don't more of them in action together. Most of the film is a huge stereotypical montage of standard scenarios you can see coming a mile away. Its all very predictable and you know Berenger will never get hurt. Its undeniably fun to watch these sequences where the youths are acting up with their gangland dialect, waving their hands around making gang signs, virtually behaving like cartoon characters whilst being dressed like bums. At the same time all the girls looks greasy, sweaty and thoroughly unwashed haha need I say almost all the youths are black, Latino or Hispanic. Yep this film doesn't beat around the bush with racial attitudes towards suburban inner city schools in the US. So yes you could say its racist and a bad image on certain groups of young people but dare I say could it also be the truth?. That aside its still a rush to see Berenger humiliate the posers and stamp his authority on the class. I must also say Marc Anthony is really well cast as the slimy skinny gangland leader within the class, a simmering undertone ready to pop. You really do dislike this guy as the plot builds, you know Berenger could kick his ass but he still has that ominous presence, plus the fact he's only suppose to be a teen makes him even more annoying when he gets all mouthy. The whole thing is pretty hokey and like I said before it is very predictable. The finale shoot out within the school is cool though no doubt about that, although I would have preferred if the bad guys had brought lots of gang thugs to the battle instead of their special ops guys. That kinda dismisses the fact the good guys are a special ops team, its suppose to be mercs vs drug dealing thugs. Still its very cool to see all of Berenger's mercs kick ass in their own unique way. A final kudos to Ernie Hudson as the shifty principle of the school, his performance isn't much better than his hammy role in 'Congo' but that's why its so good. Definitely a bit of an adrenaline rush at times with this one, I think everyone has had fantasies about kicking the crap out of their old school bullies at some point. This would probably be a step too far but I'm sure being a badass merc teaching out of control youths a lesson would still be right up there.

A cross between two different types of movies. The inspirational teacher / student movie and an action movie. I liked it but there wasn't anything about it that really rocked my world. The characters were plain and cookie cutter, the plot was simple, and the action wasn't anything special. But it was an entertaining watch.