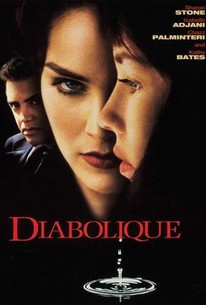 Critics Consensus: This seedy remake of a classic French chiller goes through the motions in recreating the original's diabolical plot, but without the genuine suspense or stylistic finesse.

Critics Consensus: This seedy remake of a classic French chiller goes through the motions in recreating the original's diabolical plot, but without the genuine suspense or stylistic finesse.

Critic Consensus: This seedy remake of a classic French chiller goes through the motions in recreating the original's diabolical plot, but without the genuine suspense or stylistic finesse.

A remake of Clouzot's classic thriller Les Diaboliques, this American version follows the same basic plotlines for the bulk of the film but then towards the end branches out in new directions that for those familiar with the original 1955 film may find ineffective and disappointing (some purists may find the whole film a blasphemous travesty). Set in a remote, decaying boarding school run by the brutish, controlling Guy Baran. His wife Mia actually owns the school, but her husband runs it. Knowing that she has a fragile heart and could die soon, Guy does all he can to keep her upset. This includes openly having an affair with teacher Nicole Horner, whom he also abuses. One day both women decide that they have had enough and hatch a devious plot to murder Guy. This is where the notorious bathtub scene comes into play though most agree that Clouzot did it much better than this film's director Jeremiah Chechik. Afterward, the women take Guy's body to the school's murky outdoor swimming pool and toss it in, hoping that anyone finding him will think he accidentally drowned. Eventually the pool is drained, but no body turns up, leaving the women to wonder, did he really die, or did someone else know about their crime?

The husband is still a brute, and the swimming pool is still moldy, but the new Diabolique fails to translate into anything more than the latest ham-handed Hollywood makeover of a European classic.

Film lovers should study the two Diaboliques side by side, in order to see how the Hollywood assembly line trashed its treasure from the past.

The plot and premise of Diabolique are absurdly implausible, but that's the power of good movies: they make you believe in the impossible.

There are problems with Stone's performance, which lacks the requisite ambiguity to make sense of the plot. But Adjani carries Diabolique by creating a Mia who is susceptible to any hint that the dead man may somehow have risen

The new Diabolique mostly dispenses with subtlety, contenting itself with regularly scheduled cathartic jolts that pass for suspense in our degraded culture.

If it makes at least one person search out and discover the original version, then it's all worth it.

Silly update of the French classic; the ending is an unforgivable cop-out.

Why do Hollywood filmmakers keep messing around with and screwing up past successes?

Sharon Stone's delightfully slinky outfits are the only genuine attraction in this updated so-called thriller, which pairs her with Isabelle Adjani as the mistress and wife who decide to murder abusive school headmaster Chazz Palminiteri. What was fresh and genuinely frightening in French director Henri-Georges Clouzot's original is old hat here.

One of those movies that I liked very much when I was a kid. Sharon Stone was awesome in this movie!

Good movie with Kathy Bates and Sharon Stone. A wife and mistress plot to kill their lover, but the body disappears. Suspense movie full of twists and turns.