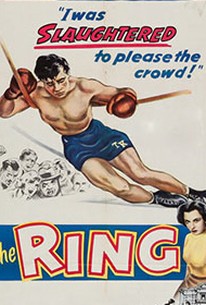 The Ring was directed by Kurt Neumann in a style best described as Hollywood neorealist. Based on a novel by Irving Shulman, the film focuses on a Mexican-American youth named Tommy (Lalo Rios). Unable to make any headway in a prejudicial, white-dominated society, Tommy turns to boxing, where he makes quite a name for himself. Just when he thinks he's gained the respect of the "Anglos," however, he discovers that they're only interested in his reputation, and still consider him an outsider because of his ancestry and skin color. Even the two white men who treat him decently -- his manager Pete (Gerald Mohr) and trainer Freddy (Robert Osterloh) -- have a vested interest. In danger of ending up a disillusioned, punch-drunk bum, Tommy is rescued by the unconditional love of his girl Lucy (Rita Moreno). Filmed entirely on location in greater Los Angeles, The Ring is for the most part an uncompromising glimpse at institutionalized bigotry.

Critic Reviews for The Ring

A simple story worth watching for its depiction of prejudice and discrimination Mexican Americans experienced in Los Angeles. Not a perfect film, but a movie worth your time for the simple fact that in the 1950s these stories were being told.

Well worth seeing for such episodes as dreary bus trips to small California fight towns, the educational depiction of a trainer's chores, the tired routine that goes on after a losing fight.

Audience Reviews for The Ring

There are no featured audience reviews yet. Click the link below to see what others say about The Ring!