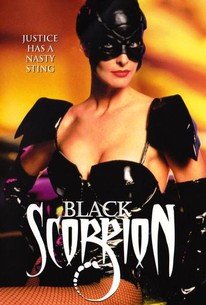 This B-movie from director Rodman Flender (The Unborn) was originally broadcast on Showtime's Roger Corman Presents series. Joan Severance stars as a cop who becomes a leather-clad superhero named Black Scorpion when her father is murdered in a barroom shooting. The murder is part of a seemingly random crimewave engineered by an asthmatic villain called the Breathtaker, who wears a big metal suit like comic book bad-guy Dr. Doom. Breathtaker is planning to turn the whole city into his wheezing slaves by way of poisoned gas masks, and Severance must stop him. In between, she gets former car-thief Argyle (Saturday Night Live alumnus Garrett Morris) to build her a super Scorpion-mobile and tries to keep her identity secret from former partner/lover Bruce Abbott (Re-Animator).

Steven Kravitz
as Rookie No. 1

Shane Powers
as Cop No. 2

Anthony Kramme
as Security Guard No. 2

Mike Elliott
as Cop No. 1

Gregg Brazzel
as Guard in Store
View All

For all its broad (and periodically inane) silliness, Black Scorpion is a b-flick that delivers what it promises, with a whole lotta Severance on the side.

Ah a Roger Corman epic that actually spawned its own comicbook and TV series which would indicate that the film is quite good...wouldn't it. Well I'm pleased to say that the film is actually pretty good IF you're interested in incredibly cheesy cliched trashy low budget superhero flicks that combine the camp of the 60's Batman and Robin series and the sleazy visuals of something like Barb Wire. Yep its an all round winner for meeee! The plot is an unbelievably stereotypical comicbook setup. A young woman's father is shot dead in front of her eyes which leads her to reinvent herself as the superheroine vigilante Black Scorpion. This happens just in the neck of time as a super villain who was once a hospital doctor that was accidentally shot dead by the Black Scorpions cop father when she was a child, has come back to wreak revenge on the city by using a toxic gas in the air supply (the cities air supply?). This villain is now encased within a metallic suit because he has major asthma...and facial deformities for some reason, from the injuries suffered from his near death experience. So naturally he has lots of henchmen and equipment to plunge the city into despair. So like Batman the Black Scorpion fights crime and stands up for justice...especially justice for women naturally. At first she merely ekes out an existence on her own taking down pimps and muggers with martial arts in her tight scantily clad outfit and surprisingly expensive hot rod. But as the film goes on she picks up a cool cat sidekick that just happens to be able to supply her with neat gadgets and revamp her car. From there on the Black Scorpion flies around the city in a transforming American muscle car which is decked out with all sorts of hi-tech equipment...just like the Batmobile. When I say transforming I mean the car morphs into a completely different car in a dreadfully bad CGI/effects sequence, its impossible and makes no sense at all but I don't think that's a concern here. The bad guy in his robot suit looks like something from an old Dr Who episode, its laughably stupid looking and still makes me wonder how a bullet hit to the chest would equal the need for this suit...and give him chronic asthma. The bloke inside this thing can hardly move which makes it even more amusing, lots of quick cut edits when he's involved in the action, but as I said luckily he has lots of expendable henchmen just waiting to have their asses kicked by a female in fishnets. As for the Black Scorpion played devilishly by Joan Severance, her outfit is bordering on softcore S&M with black thigh high boots, fishnets, long black elbow length PVC gloves, a nice black shiny PVC cleavage and a Catwoman style mask. I won't deny it looked good if a little vanilla for my tastes, no way she could do half the stuff she does in those boots though. The actual film is an odd creation, like I said already it plays like a camp pantomime, like the famous Adam West/Burt Ward TV series. Yet at the same time its a very adult film in places, there are strippers and hookers with tits n ass and on show, a few revealing outfits, clear cut male fantasy sequences of blokes getting beaten up by a woman in BDSM gear and even a simulated oral sex scene which is pretty darn good. It may be a silly childish exaggerated homage to the comicbook genre but it certainly isn't for the kids. There isn't really any blood and gore though, the violence is pretty much on par with The A-Team. You don't see much, no squibs or bullet holes...just men throwing themselves around. In the end the film is clearly meant to be a true over the top comicbook flick with larger than life characters and unrealistic scenarios. In no way is it meant to be taken seriously, the superheroine is not a realistic believable character in any sense even though she has no super powers and no bottomless bank account...just the muscle car. In a sense she is more akin to a character from the Kick-Ass universe I guess, being a vigilante with a ridiculous outfit. This film does remind me of the recent Green Hornet movie actually, the ethnic sidekick and muscle car loaded with gadgets that is. A cool little mishmash of sordid tacky fun and camp goofiness with ass...well worth it.

A lady in Leather who happens to be SuperHero named Black Scorpion. I watched this movie because I had flu. lol It is very cheesy Movie. Seems a female spoof a mix of catwoman and batman.

Joan Severance as a former cop turned black-garbed avenger of the night appearance owes a lot to Michelle Pfeiffer's nasty leathers in Batman Returns. Joan's considerably more blatant about her sexual hunger, but the modern noir setting - in this case the City of Angels - is every bit as deliciously seamy.