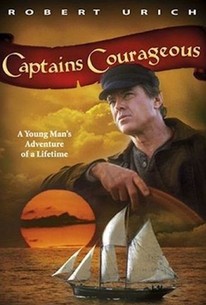 Rudyard Kipling's classic novel is re-told in this made-for-television adaptation. Robert Urich stars as Troop, the captain of a schooner who rescues a child (Kenny Vadas) after he falls overboard from a passing ship. The boy -- a spoiled, orphaned, rich kid -- learns valuable lessons about life and the sea as Captain Troop and his son make him earn his passage on their vessel.

Ken Camroux
as Spokesman
View All

There are no critic reviews yet for Captains Courageous. Keep checking Rotten Tomatoes for updates!

There are no featured reviews for Captains Courageous at this time.