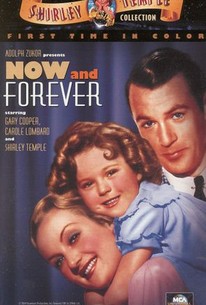 Ne'er-do-well Gary Cooper is so desperate for quick cash that he's willing to sell the custody rights of his own daughter (Shirley Temple), whom he's never seen. Cooper's girlfriend Carole Lombard is shocked by this callousness and walks out on him, but when Cooper meets his daughter and has a change of heart, he reclaims the little girl and is reunited with Lombard. Still, Cooper can't hold down a job. Another get-rich-quick scheme ends unhappily when Cooper is forced to participate in a jewel robbery. After fighting it out with his confederates, the wounded Cooper begs the victim of the robbery, a wealthy and loving woman, to adopt his daughter and give her the sort of life he is unable to provide. Now and Forever would have been mighty turgid stuff without the combined star power of Gary Cooper, Carole Lombard, and six-year-old Shirley Temple.

Buster Phelps
as Boy with Skates

Sam Harris
as Man at Pool

Grace Hayle
as Lady in Store

Critic Reviews for Now and Forever

Audience Reviews for Now and Forever

It's a Shirley Temple movie, what else can I say?