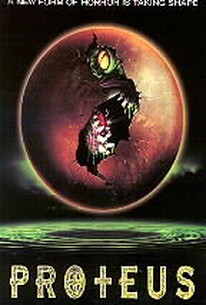 In this British sci-fi thriller a group of drug smugglers race their yacht across Hong Kong harbor as they attempt to escape triad gangs after a botched drug deal. They end up docking at a seemingly abandoned off-shore oil rig and it isn't long before they discover that they would have been better off in the triad's hands as the rig is really a research lab where a hungry, constantly morphing genetic experiment has eaten all of the scientists. The newly arrived thieves offer it a veritable smorgasboard, provided they don't get the creature first. ~ Sandra Brennan, Rovi

There are no critic reviews yet for Proteus. Keep checking Rotten Tomatoes for updates!

There are no featured audience reviews yet. Click the link below to see what others say about Proteus!