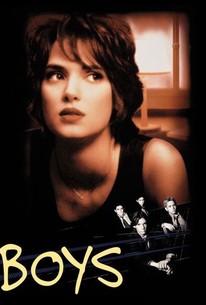 Critics Consensus: Winona Ryder's femme fatale proves to be a blank cipher in Boys, a mystery with an intriguing hook that quickly fizzles into teenage ennui.

Critics Consensus: Winona Ryder's femme fatale proves to be a blank cipher in Boys, a mystery with an intriguing hook that quickly fizzles into teenage ennui.

Critic Consensus: Winona Ryder's femme fatale proves to be a blank cipher in Boys, a mystery with an intriguing hook that quickly fizzles into teenage ennui.

In this melodramatic mystery, teenager John Baker stumbles across the unconscious form of a woman in a field near the boys' school he attends. When the woman regains consciousness, she refuses to go the hospital and insists on hiding out in John's dorm room, involving him in a strange mystery.

Stacy Cochran wrote and directed and I fell asleep.

As vague and unfocused as its title.

The actors do a nice job of investing it all with a certain conviction, and there's a fairy-tale tinge to some of the action that gives it a certain charm.

The movie's not helped at all by Ryder, who seems uncomfortable playing femme fatale to these grimy-fingered boys, as if she doesn't believe anyone could feel this adulative about her.

Writer/director Cochran is stronger on capturing the texture surrounding her characters' converging experiences than making much of it when they do get together.

A small, cramped film about an aimless woman in her mid-20s who becomes involved with an innocent prep school student.

What begins as an edgy examination of sheltered, selfish kids making stupid choices devolves into a ludicrously mannered celebration of adolescent rebellion.

Haas and Ryder let off some serious sparks, even if the screenplay doesn't

Obviously reshot and recut to the point of complete incoherence

A dreadful disappointment of epic proportions.

Boys is a poorly written and ill conceived drama that never even tries to involve the viewer.

Wow this was a bad movie. Taped it off tv as I had never seen it and had liked a few of Winona's older movies. I remember hearing bad reviews on it when it was first out, but figured I'd check it out anyhow. I mean, I like some crap, let's face it. But this..... this was a whole new level. Ten minutes in and I'm already bored crapless. Ugly film to look at, not a whole lot happening in story either...I stuck with it to see what all the flashbacks were hinting at. Surely be interesting at the end... but no, lame as, and don't even get me started on the ending. I mean, where the hell where they running off to?! And Winona's acting in this was like she was mentally challenged, not injured. Extremely ill advised. Avoid.

This film is one of those unfortunates that would have been great, but just didn't. Great music regardless!