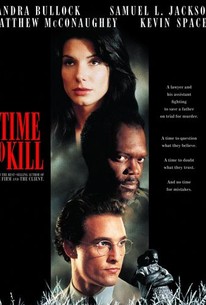 Critics Consensus: Overlong and superficial, A Time to Kill nonetheless succeeds on the strength of its skillful craftsmanship and top-notch performances.

Critics Consensus: Overlong and superficial, A Time to Kill nonetheless succeeds on the strength of its skillful craftsmanship and top-notch performances.

Critic Consensus: Overlong and superficial, A Time to Kill nonetheless succeeds on the strength of its skillful craftsmanship and top-notch performances.

A Time to Kill Photos

Carl Lee Hailey takes the law into his own hands after the legal system fails to adequately punish the men who brutally raped and beat his daughter. When Hailey chooses novice lawyer Jake Brigance to handle his defense, it begins to look like a certainty that Carl will hang.

Mike McLaren
as Administrator at Whitfield

Leonard Thomas
as Man in Lumberyard

David U. Hodges
as Bailiff

Howard Ballou
as Reporter No. 1 with Hastings

Todd Demers
as Reporter No. 1 with Jake

Stephanie Strickland
as Reporter No. 1 with Buckley

Kim Hendrix
as Reporter No. 2 with Buckley

Rob Jay
as Reporter No. 3 with Buckley

Sherri Hilton
as Reporter No. 2 with Jake

Rosebud Dixon-Green
as Woman at Rally

Critic Reviews for A Time to Kill

(Grisham) films are... grossly over-inflated examples of that old genre which hardly ever need change, the courtroom drama. A Time To Kill is no different, except that its verdict would be laughed out of any court anywhere in the civilised world.

A likable -- maybe even lovable -- movie.

Although it has its share of implausibilities, A Time To Kill is generally the most satisfying of the John Grisham screen adaptations to date.

Justice may be blind, but rarely have courtroom dramas presumed quite so heavily on cultural myopia as this heinous version of John Grisham's first novel.

If the film doesn't add up to a cogent legal argument, neither does it have trouble delivering 2 hours and 20 minutes' worth of sturdy, highly charged drama.

Untrained as an actor, with only three minor roles to his credit, McConaughey holds the screen against Samuel L. Jackson, Sandra Bullock and Kevin Spacey, and completely justifies the buzz surrounding his role...

...a slow-moving yet mostly engrossing drama...

It's not perfect, but perhaps that's part of its sometimes pulpy joy (and certainly McConaughey's character flaws are part of his charm).

Better grab those homemade wigs and gavels, because here comes another ripping, one-size-fits-all slab of legal eaglery from the platinum paperback pen of John "you can buy my collected works at any airport newsagent" Grisham.

Audience Reviews for A Time to Kill

The book must be also powerfull ,nothing left but to find out ...

This incredibly enthralling court drama tries to juggle a lot of themes at the same time and yet succeeds. Race issues in the southern US meet the question of taking law into your own hands to punish those who deserve it. The film can rely on a gripping script and a stellar cast. The dialogs, while sometimes not without stereotypes, are spot on most of the time and deliver strong scenes that demand everything from the actors. McConaughey, Jackson and Spacey all deliver. It's probably physically impossible not to be moved one way or another by the events of this film, even if you catch yourself realizing how it is playing you. The result is so well filmed and delivered that it is nothing less than one of the strongest and most exciting court dramas ever put on film.

Cast: Matthew McConaughey, Kevin Spacey, Sandra Bullock, Samuel L. Jackson, Charles S. Dutton, Oliver Platt, Brenda Fricker, Donald Sutherland, Ashley Judd, Tonea Stewart, John Diehl, Chris Cooper, Nicky Katt, Kurtwood Smith, Beth Grant, Joe Seneca, Anthony Heald, Alexandra Kyle, Kiefer Sutherland Director: Joel Schumacher Summary: When two white men brutally rape a young black girl in a small Mississippi town, the child's vengeful father (Samuel L. Jackson) fears their acquittal and takes the law into his own hands. But as his trial date approaches, all hell breaks loose. Aided by lawyer Jake Brigance (Matthew McConaughey) and his spunky legal assistant (Sandra Bullock), the father fights to stay out of prison and salve his daughter's terrible memories. My Thoughts: "By far one of the best movies I have ever seen. All the performances where outstanding. Some of my favorite actors are in this movie so that was a plus. But more then anything, it was the story line that brought me to watch this movie that I have seen multiple times. The best John Grisham story put to film. The story is tragic, sickening, and intense. But inspiring as well."

I still believe this is one of the best grisham film adaptaions.

A Time to Kill Quotes