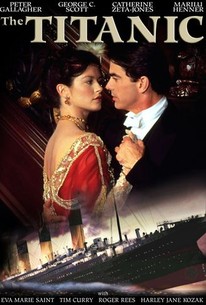 In 1912, the H.M.S. Titanic was the largest ocean liner built to date, and its designers had incorporated several features they believed would make the ship virtually unsinkable. However, the Titanic never returned from its maiden voyage; after striking an iceberg, the ship slowly sank to the bottom on the ocean, with most of its passengers meeting a watery grave in the freezing ocean. The 1996 made-for-television movie Titanic tells the story of how this disaster came to befall the great ship, and what happened to the passengers on board -- both the wealthy socialites in first class and the poor immigrants in steerage. The cast includes George C. Scott as Capt. Smith, Peter Gallagher as Wynn Park, Eva Marie Saint as Hazel Foley, Tim Curry as Simon Doonan, Marilu Henner as Molly Brown, and Catherine Zeta-Jones (before she became a major star in The Mask Of Zorro and Entrapment) as Isabella Paradine.

Although this miniseries doesn't come close to capturing the scope of the disaster as Cameron did, the filler material is far better.

Titanic is an entertaining and dramatic made-for-television film that's quite comprehensive. Aboard the maiden voyage of the RMS Titanic an estranged couple rekindle their romance and a pair of thieves plan an intricate heist, but destiny intervenes. A number of impressive stars form the cast, including George C. Scott, Catherine Zeta Jones, Tim Curry, Marilu Henner, and Barry Pepper. While most of the acting is subpar, some of the actors like Scott, Jones, and Curry really shine. Yet, the film is surprisingly ambitious; attempting to tell the entire tale of Titanic, from its launch to the survivors' arrival at New York. It also attempts to incorporate a number of CGI shots, and although the CGI is rudimentary, it works well enough. While the made-for-television format limits the film, Titanic still delivers an impressively captivating adventure.