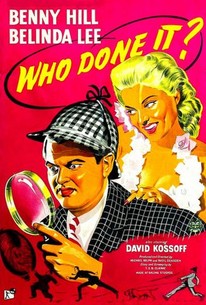 Who Done It? Photos

This British comedy is the feature film debut of popular television comic Benny Hill who plays an ice-rink sweeper who enters a contest and wins a small fortune and a bloodhound. He decides to abandon the rink and become a private eye. Soon he finds himself up to his neck in trouble after he begins investigating the planned assassination of prominent British scientists. Slapstick mayhem ensues.

Jeremy Hawk
as Himself

Norah Blaney
as Actress
View All

Critic Reviews for Who Done It?

Those expecting the double entendres and other naughty bits that later became Hill's trademark won't find any of that here.

Benny Hill, a comedy star of British television, makes his big-screen debut in this fast, rather frenzied detective farce. On the whole, an entertaining show.

There are no featured reviews for Who Done It? at this time.

Who Done It? Quotes