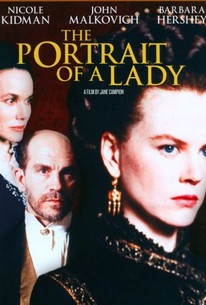 Critics Consensus: Beautiful, indulgently heady, and pretentious, The Portrait of a Lady paints Campion's directorial shortcomings in too bright a light.

Critics Consensus: Beautiful, indulgently heady, and pretentious, The Portrait of a Lady paints Campion's directorial shortcomings in too bright a light.

Critic Consensus: Beautiful, indulgently heady, and pretentious, The Portrait of a Lady paints Campion's directorial shortcomings in too bright a light.

The Portrait of a Lady Photos

Jane Campion directed this expressive adaptation of the classic novel by Henry James. Isabel Archer (Nicole Kidman) is a young American woman who, after the death of her parents, has been sent to England to visit relatives. While her family's tragedy has left her penniless, Isabel's beauty has earned her the attentions of a number of eligible men. When Isabel turns down a proposal of marriage from the wealthy Lord Warburton (Richard E. Grant) because she does not love him, her cousin Ralph (Martin Donovan), who is also smitten with her, arranges for his father to leave her a fortune before succumbing to tuberculosis so that she may live as an independent woman. Isabel takes a tour of Europe, where she meets Madame Merle (Barbara Hershey), a jaded sophisticate and matchmaker who introduces her to Gilbert Osmond (John Malkovich), a widowed American artist living abroad. Isabel falls in love with Gilbert and they marry, but his sloth and opportunism soon begin to wear on her, and three years later she is desperate to get out of their relationship. The Portrait of a Lady also stars John Gielgud, Mary-Louise Parker, Christian Bale, and Shelley Winters. ~ Mark Deming, Rovi

Alessandra Vanzi
as Nun No. 2

Katie Campbell
as Miss Molyneux No. 1

Achille Brugnini
as Footman at Ballroom
View All

Critic Reviews for The Portrait of a Lady

This claustrophobic Portrait of a Lady is the kind of failure only a very gifted filmmaker could make: like it or not, it haunts you.

Director Jane Campion not only alludes to the contemporary resonance of this hundred-year-old tale, but with this bold stamp she lays claim to the story that follows as wholly her own.

Portrait feels like an elegant party, full of attractive people, beautiful finery and tremendous music (from Wojiech Kilar), yet no excitement. And no matter how many times you revisit the place, it never gets better.

This is a film that appeals to the head far more than to the heart, making for a portrait that seems somewhat less than complete.

Jane Campion and screenwriter Laura Jones have... produced an adaptation as cinematically intelligent as it is faithful to the original.

Ten years on, the drama is still too slow but the film is far more watchable in the comfort of one's home with the pause button at the ready.

Campion makes an unruly costume drama out of the 1881 novel by Henry James.

The director has a brilliant eye. But she fails to get behind the eyes of her heroine.

The beauty of Jane Campion's film lies not in what is said, but what is not said. The understated is beautifully captured in this stunning period piece.

Throughout Portrait there is a nagging sensation that makes one want to ask, "But where is all this going?"

The point of this imagery is not that Isabel has relapsed into the figure of the Gothic heroine, but that that figure in part informs her sense of self.

As much as director Jane Campion claims to love Henry James' 1881 novel Portrait of a Lady, her movie of it is Jane Eyre all over again, a romantic horror story.

Audience Reviews for The Portrait of a Lady

"The Portrait of a Lady" starts with Isabel Archer(Nicole Kidman) rejecting the proposal of the super wealthy Lord Warburton(Richard E. Grant). Next, it is Caspar Goodwood(Viggo Mortensen) who was reinserted into her path by Isabelle's supposed friend Henrietta(Mary-Louise Parker) only to be turned down. Seeing Isabelle's options disappear and fearing for her future, her cousin Ralph(Martin Donovan) comes up with an alternate plan that involves his dying father(John Gielgud). "The Portrait of a Lady" is a beautifully rendered period piece. So, it might come as a surprise that director Jane Campion gets lost not so much in the details but in its retrograde politics and customs, using a modern day prologue to reinforce her questioning the choices that women make. On a different tact, Campion somehow manages to restrain her eclectic cast in order to not outshine the movie's supposed star and manages to only bring them down to Kidman's unresponsive level, and sucking some of the oxygen out of the room in the bargain. Speaking of the eclectic cast, Mary-Louise Parker and John Malkovich(who has somehow never played Lenin) show up again in the "Red" films while Parker and Martin Donovan star again together in "Pipe Dream" and appearing together in the televsion series "Weeds."

Film not so good but Malkovich nailed it!

The Portrait of a Lady Quotes