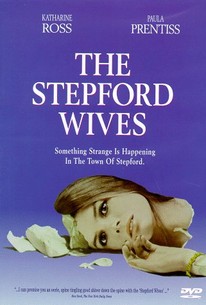 In the William Goldman-scripted, Bryan Forbes-directed adaptation of Ira Levin's savagely satiric sci-fi novel The Stepford Wives, housewife Joanna (Katharine Ross) moves with husband Walter (Peter Masterson) and their children to the "ideal" suburban community of Stepford, CT. Slowly, Joanna deduces that something is amiss; most of the other housewives are vapid creatures who speak in trivialities and live only to please their husbands. Together with new friend Bobby (Paula Prentiss), she investigates this curious status quo. When Bobby also succumbs to cloying sweetness, Joanna discovers that Stepford's husbands have conspired with male chauvinist scientists to replace all the wives with computerized android duplicates. The Stepford Wives became a massive, runaway hit, earning four million dollars domestically. Mega-producer Scott Rudin and director Frank Oz teamed up for a remake in 2004.

Dee Wallace
as Nettie the Maid

Critic Reviews for The Stepford Wives

Overlong and underdeveloped, this flimsy Bryan Forbes horror story (1975) would probably have made a decent television movie; but on the big screen and stretched to nearly two hours, it sags badly.

William Goldman's leisurely script and Forbes' dull direction never quite capture the subtleties of Ira Levin's novel about an idyllic Connecticut commuter village where the housewives are a bunch of domesticated dummies.

The humor that remains in the movie is preesnted with such facetiousness one almost feels embarrassed to watch. You want to tell the actors to take it easy, since it's apparent that Bryan Forbes, the film's director, didn't.

I can imagine similar material being directed by, say, Woody Allen, and coming out pointed and funny. Instead, director Bryan Forbes gets all solemn and spooky and goes for obvious effects like bolts of lightning and forbidding Gothic mansions.

Critical of the suburban milieu as a petri dish where regressive sexist fantasies are cultivated.

In trying for a nice liberal up-to-date angle on women within such a very conventional form as the commercial horror movie, I think The Stepford Wives actually broke through into some surprisingly rebellious images.

It's a chilling piece of film-making that sets up its own limitations and achieves its goals with almost clinical precision.

I must say that for all its preposterous moments, I enjoyed the movie and found even its weakest links a good deal more intelligent than the usual kitsch to be found in this sort of thing.

Sleazy rather than slick.

A reflection on a society that wants to have it both ways.

Audience Reviews for The Stepford Wives

Interesting, and eerie horror film, The Stepford Wives is one of those films that takes its time with the plot to grab you in, and it works. There are terrific elements in the script that make this a standout picture, one that can resonate with the viewer and make for a memorable, tense and thrilling horror going experience. The acting here deliver some great performances and each bring something unique to the film that enhances the film's story even more. The Stepford Wives is a stunning film, one that is a genre classic, and if you enjoy old school horror, then this is a must see film. The film's story is well layered and keeps you involved from start to finish. The film has plenty of atmosphere and tension to really make it stand out, and the storyline is well constructed, thought out, and is one of the most thrilling Sci Fi horror pictures of the 1970's. The idea here is simple, yet effective enough while delivering a film that is sure to delight genre fans. The Stepford Wives is a great horror film, one that is subtle, yet disturbing at the same time. The film uses the conspiracy angle to tell its story. The Script is smart, intriguing and keeps you on the edge of your seat till the very end. The film concerns a group of men who replace their wives with humanoid robots. This is a well acted film aided by a well thought out script that makes for a truly memorable viewing experience. The tone is subtle, but the subject is tackled with a steady pace, in order to make this a standout genre film, and even if you know how it might end, the strength of the previous hour or so makes it an impressive picture worth seeing. Director Bryan Forbes pulls off a horror tour de force that is not perfect, but is nonetheless a very good movie that horror fans will surely enjoy.

Uneven attempt to reach the level of unsettling paranoia and commentary on women's lib against conservative/intrusive community of "Rosemary's baby" (based on a novel by the same author).

I really like this film alot. I have not read all of the novel, but I have read enough of it to know that this adaptation is more in sync with the mood and tone of the book. It's dark, and quite disturbing. The new one is equally as entertaining, but I prefer this dark, creepy adaptation better than the satirical 2000's version. Very good film!