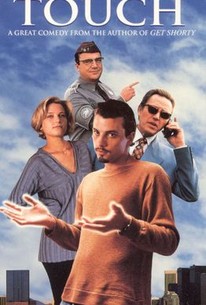 A pacifistic young man heals the sick and becomes a national sensation. Based on a novel by Elmore Leonard and directed by off-beat filmmaker/screenwriter Paul Schrader, this light and lively satire centers on the tempest that soon surrounds the innocent miracle worker. He is Juvenal and comes from Brazil to work in a Los Angeles alcohol rehab center. Along the way, Juvenal matter-of-factly restores a blind-woman's sight and cures a boy of leukemia by touching them each with his hands, which tend to bleed, much as Christ's bled while he was on the cross. To Juvenal, the miracles are commonplace and he thinks little of their import. But others think differently and actively seek to exploit him. The sharks eagerly awaiting the opportunity to prey upon him include former evangelist cum RV salesman Bill Hill, hard-core Christian fundamentalist August Murray, and a self-serving reporter.

LL Cool J
as Himself

Dennis Burkley
as Hillbilly
View All

The experience of seeing the film is subduing; the movie plays in a muted key.

Paul Schrader and comedy have probably never had more than a nodding acquaintance, and that's what they have in this tepid satire.

The end result is an effort that starts to vanish from one's memory minutes after it concludes...

A disaster--and not the kind that's fun to watch, either.

Pleasantly entertaining and intelligent, it does not create enough of a spiritual mystery to move the heart, but watching the characters droolingly circle one another has its own, more earthly rewards.

I saw it as a plot searching for a director.

A solid adaptation of Elmore Leonard's novel, with a nice lead performance by Skeet Ulrich.

Although not destined for greatness, there are some appealing elements about this irreverent comedy that doesn't take itself too seriously; bizarre characters, off-the-wall concepts and absurdly funny lines.

Begins with an interesting premise, that an ex-monk has the power to heal, but degenerates into a passel of cliches injected, it seems, simply to finish the work, as if the director took a more important call mid-interview. You will cease to care as well although Tom Arnold heroically behaves throughout as if there were still a film to save.

Tried to write a review and failed so I'll stick with my thoughts while watching the film: "This is exactly the film you'd get if Tarantino brought the rights to The Green Mile."