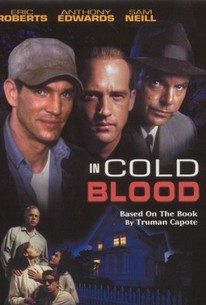 The crime that shattered America's innocence comes to vivid life in this adaptation of Truman Capote's groundbreaking non-fiction book of the same name (which was previously adapted for the screen by director Richard Brooks in 1967). Compelled by a fellow convict's claim that a wealthy Kansas rancher named Herb Clutter has stashed $10,000 in his home safe, 20-year-old convict Dick Hickock (Anthony Edwards) bides his time behind bars awaiting the day he will be paroled. When that day comes, he recruits unrepentant ex-con Perry Smith (Eric Roberts) to help him retrieve the cash. Upon invading the Clutter's home on a crisp November night in 1959, however, Hickock and Smith find no safe, and fly into a rage, killing the rancher, his wife, and their two teenage children. Later, despite a disheartening lack of evidence, Detective Alvin Dewey (Sam Neill) does everything in his power to crack the case, and catch the killers.

Critic Reviews for In Cold Blood

There are no critic reviews yet for In Cold Blood. Keep checking Rotten Tomatoes for updates!

Audience Reviews for In Cold Blood

There are no featured audience reviews yet. Click the link below to see what others say about In Cold Blood!