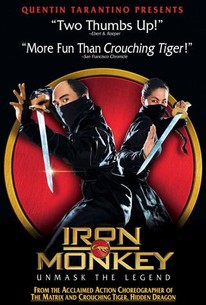 Critics Consensus: Iron Monkey may not have the poetic lyricism of Crouching Tiger, it makes up for it in fun and energy.

Critics Consensus: Iron Monkey may not have the poetic lyricism of Crouching Tiger, it makes up for it in fun and energy.

Critic Consensus: Iron Monkey may not have the poetic lyricism of Crouching Tiger, it makes up for it in fun and energy.

This kung fu classic weaving fact and myth earned a theatrical release in the U.S. from Miramax eight years after it was produced, following a successful retrospective screening at the 2001 Los Angeles Film Festival. Wong Kei Ying (Donnie Yen) is a master of the Hung Gar style of boxing in mid-19th century China. His son, Wong Fei Hung (Sze-Man Tsang), though still just a boy, will grow up to become a martial arts legend, a nearly mythical figure in Chinese history. When Wong Fei Hung is kidnapped, his father is forced to use his daunting skills in the service of the abductor, a dishonest politician plagued by the Robin Hood-style thief known as Iron Monkey, a mysterious masked avenger stealing from the rich, delivering the spoils to the poor. Wong Fei Hung's only allies are the kindly Dr. Yang (Yu Rong Guang) and Yang's assistant, Orchid (Jean Wang), who are protecting an important secret. Iron Monkey (1993) director Yuen Wo Ping is also the masterful martial arts choreographer behind The Matrix (1999) and Crouching Tiger, Hidden Dragon (2000); his father served as action choreographer on a series of popular, long-running films centered around the Wong Fei Hung character in the 1950s. ~ Karl Williams, Rovi

Yang Yeo-kwan
as The Monk

The joy of watching this kind of stuff lies in the choreographical invention and creativity [and] the speed and dexterity of the combatants.

Yuen tosses off nimble, elegantly witty solutions to life's most vexing problems regarding rooms full of bad guys who won't take thwak for an answer.

[Yuen's] fights are innovative and intense, whether they're a whirlwind one-on-one duel or one of many struggles featuring multiple combatants.

Think of Iron Monkey as the potboiling cousin of Crouching Tiger, rather than its most honoured forefather, and you'll be on the right wavelength.

As a perfect complement to the adventure, a generous portion of comedy is blended in - sometimes just with witty bits of dialogue and frequently with physical slapstick.

"Iron Monkey" is a masterpiece of the genre (to say the least) and a film all fans of wuxia and martial arts in general should have in their collection.

Some of the fighting is on par with, or better than, anything you're likely to see in a Hong Kong action film.

Where Iron Monkey really comes alive is with the action, and here's where the audiences who enjoyed Crouching Tiger are repaid ten-fold.

Despite its seemingly constant action, the focus was way too light for my liking, resulting in a film that's often more corny than it is enthralling.

some of the finest martial arts displays imaginable, and it doesn't take itself seriously

Hong Kong kung-fu madness with a Robin Hood themed story. Highly regarded by martial-arts fans, and yeah, the fight scenes are spectacular, as you'd expect from legendary action director Yuen Woo-Ping who has worked in both Asia and Hollywood orchestrating some of the most impressive action sequences ever recorded on film. It's easy to see the influences this film had on the likes of Crouching Tiger, Hidden Dragon. The story and dialogue are very basic though and it's a script a 10 year-old could easily come up with. It's worth watching just for the action.

yuen woo-ping is the man. another masterfully choreographed film - the kung fu in this film is just mind blowing. i love watching donnie yen on screen and the scenes featuring a young wong fei-hung were incredibly believable. i loved this kung fu robin hood/superhero story. one of my favorite films.

Yuen Woo-ping shows that he is not only an action choreographer, but also a director as well.

At just over 80 minutes, Iron Monkey is non stop fun from beginning to end. The characters and story elements have a quirky feel to them, while also the right amount of seriousness to go along with it. The sound effects are playful, as well as the dialogue, and both fit the style of the film nicely. This picture really does just fly by.

The wire work martial arts comes in bunches with some great choreography, while the editing, as well as the high speed camera shots give the fights that hyperactive edge. There are also a variety of martial arts styles and moves to keep the film interesting.

Donnie Yen and Yu Rongguang carry this film with their acting and martial arts segments. Tsang Sze-Man and the beautiful Jean Wang also impress in the same departments.

Iron Monkey is a film that succeeds on many levels and is a martial arts picture that is easily enjoyable.