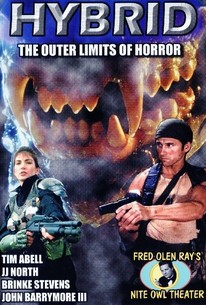 A handful of people who think they've survived it all are faced with a challenge they never counted on in this futuristic sci-fi story. After much of the Earth is devastated in a nuclear war, a hardy band of survivors -- including scientific and Marine Corps Colonel Paul Hamilton (John Blyth Barrymore), medic Leslie Morgan (Brinke Stevens), computer expert Milo Tyrell (Ted Monte), USMC Sgt. Frank Blaine (Peter Spellos), communications technician Carla Ferguson (J.J. North), and McQueen (Tim Abell), a straggler looking for his lost son -- roam the wastelands in search of food and shelter. Looking for a place to stay, they happen upon an abandoned military facility and break in. However, they soon discover they're not alone; a large and very bloodthirsty creature, created by intelligence agents as a possible weapon, was left behind, and these weary warriors quickly find themselves in the most desperate battle of their lives. Hybrid was directed by B-movie cult hero Fred Olen Ray.

There are no critic reviews yet for Hybrid. Keep checking Rotten Tomatoes for updates!

There are no featured reviews for Hybrid at this time.