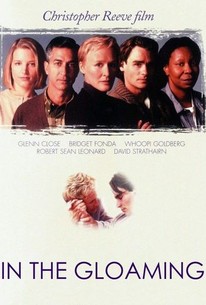 In the Gloaming Photos

Actor Christopher Reeve made his directorial debut with this dramatic made-for-cable movie about the effects of AIDS on a family. Robert Sean Leonard stars as Danny, a son who returns home to his parents to be with them in the final days of his battle against AIDS. The stress of the situation brings out the tensions and anxieties that the family members have been quietly bearing for years. Glenn Close stars as Danny's mother, who grows closer to her son through the tragedy. David Strathairn stars as his father, who struggles with the reality of his son's life and illness. Whoopi Goldberg and Bridget Fonda appear as his nurse and his sister, respectively. Beautifully filmed in Westchester, New York and sensitively directed, this film was nominated for four Emmy Awards.

Will Reeve
as Young Danny
View All

Critic Reviews for In the Gloaming

The conclusions that viewers might draw about this family, too, are a bit muddled. And yet, In the Gloaming' is an hour well worth investing in, an often deeply moving portrayal of an American family that too many, no doubt, know too well.

In the Gloaming, Christopher Reeve's sensitive made for television feature, aims to be the mother of all AIDS death dramas.

Audience Reviews for In the Gloaming

This movie might make you reconsider your relationships with friends and family. Are you you making enough time for them? For being a movie about a kid coming home to die, it is quite meaningful. They could have made it a lot more depressing

Quiet drama of a family dealing with the eminent loss of the son to AIDS. Not a happy family to begin with they have become isolated in their own worlds though the years apparently without noticing and now must come to grips with many issues in a brief period of time. Glenn Close whose character is the most anxious and willing to reforge bonds is most impressive here but Leonard, Strathairn and Bridget Fonda all do well. Very moving especially considering the short running time.

In the Gloaming Quotes