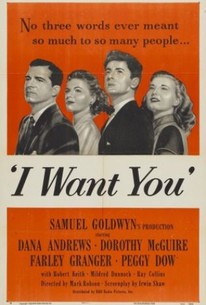 I Want You Photos

Upon beginning production on his Korean-war drama I Want You, producer Sam Goldwyn lamented "I've just brought those boys back from the war, and now I have to send them out again!" Goldwyn, of course, was referring to his Oscar-winning "homecoming" drama Best Years of Our Lives. He'd hoped that I Want You would be 1951's "answer" to that post-WW II classic, and while the later film falls short of that goal, it still has much to recommend it. The scene is a small town in the Eastern United States, where the outbreak of hostilities in Korea has a profound effect on several people. WW II veteran Martin Greer (Dana Andrews) wants to re-enlist, much to the dismay of his wife Nancy (Dorothy McGuire). Draftee Jack Greer (Farley Granger) fears that his military service will permanently shelve his plans to marry Carrie Turner (Peggy Dow). Jack's mother Sarah (Mildred Dunnock), having already lost one son in the war, resents the pro-American jingoism of her husband Thomas (Robert Keith). And George Kress, Jr. (Martin Milner) must contend with his possessive father George Kress, Sr. (Walter S. Baldwin), who'll do anything to keep his son out of uniform (Incidentally, both Dana Andrews and Walter S. Baldwin had previously appeared in Best Years of Our Lives). Screenwriter Irwin Shaw adapted I Want You from a series of human-interest articles by Edward Newhouse, which first appeared in The New Yorker.

Don Hayden
as Another Candidate

Critic Reviews for I Want You

Takes its title from a recruiting poster, which should tell you where we're going with this pic.

There are no featured reviews for I Want You at this time.

I Want You Quotes