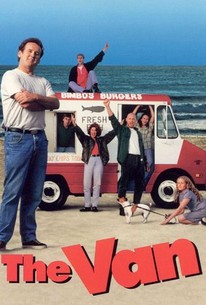 This is the third film adapted from a fictional trilogy by Irish writer Roddy Doyle about families living in a working-class Dublin neighborhood. The first was director Alan Parker's smashing music mockumentary The Commitments and the second was the hilarious comedy The Snapper, directed by Stephen Frears. Frears also directs this film, which is about two unemployed buddies who convert a dilapidated van into Bimbo's Burgers, a mobile fast-food joint selling fish and chips and hamburgers. Bimbo (Donal O'Kelly) is the brains behind the operation, while his slacker friend Larry (Colm Meany) is his bumbling helper. They first set up shop outside a pub to capture patrons streaming out after watching a telecast of Ireland playing in the World Cup. When Ireland is eliminated, the bumbling entrepreneurs move to a forlorn beach. They get the help of Larry's daughter Diane (Neili Conroy) and son Kevin (Rauidhuri Conroy), who soon becomes so disgusted with the fare that he becomes a vegetarian. ~ Michael Betzold, Rovi

Stuart Dunne
as Sam
View All

Critic Reviews for The Van

This third movie from novelist Roddy Doyle's Barrytown Trilogy is as good-natured as The Commitments and The Snapper but far less consistent.

The movie builds its comic scenes by close observation.

Shows what some people will sacrifice to keep a friendship alive.

Audience Reviews for The Van

I've always game for those droll little UK comedies, but this one notably disappointed me. Superficial and lightweight. Doesn't resonate as emotionally true. And Donal O'Kelly is not appealing at all. Another major problem: drunken Irish accents. I'd say that I understood about 95% of this film's dialogue, but no more than that.