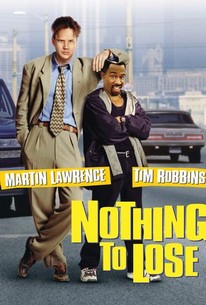 Nothing to Lose Videos

Nothing to Lose Photos

Two men with nothing in common become unlikely companions in this comedy. Advertising executive Nick Beame (Tim Robbins) is not having a good day when he comes home from work to discover that his wife Ann (Kelly Preston) is having an affair with another man -- who, adding insult to injury, happens to be his boss, Phillip Barrow (Michael McKean). Deeply depressed, Nick hops into his SUV and starts driving aimlessly. He ends up in a rough neighborhood where a carjacker, T. Paul (Martin Lawrence), pulls a gun and jumps in the passenger seat. Nick grumbles "Boy, did you pick the wrong guy on the wrong day," and, thinking he has no reason to live, heads out to the desert over T. Paul's objections. Nick learns that T. Paul is actually a family man who has turned to crime because he can't get a job. Nick offers to help T. Paul, though crime is not one of his strong suits, and things get even more complicated when a pair of crooks, Rig (John C. McGinley) and Charlie (Giancarlo Esposito), start following them.

Jodi Jinks
as Girl at Checkout

Victoria Redstall
as Woman in Bar
View All

Critic Reviews for Nothing to Lose

Nothing to Lose is mainstream, mildly entertaining, but clearly a money grab by [Tim] Robbins and his less-in-demand co-star, Martin Lawrence.

Oedekerk's screenplay has serious ambitions, which it should have suppressed.

A bumpy buddy romp that's mildly winning thanks to its stars.

For every fresh, funny scene... there is another that is incredibly forced.

Too embarrassing for Robbins

Robbins and Lawrence make the perfect duo. Funny as hell.

Robbins' understated depression and Lawrence' hyperactive ranting are the perfectly hilarious foil for one another.

A fantastic comedy. Lawrence and Robbins share an electric chemstry.

Audience Reviews for Nothing to Lose

04/09/2011 (ONLINE) FUNNY! I enjoyed this awkward partnership that made things dangerously hilarious. Putting oil with water only causes separation but if you shake things up you have "Nothing to Lose" right? This is old-school for me and seeing it now still has me bursting with laughter, not only that but a pretty dramatic situation that intensifies the humor... hoping for the best and laughing at the worst. You got nothing to do? Put this on... kick back... you got "Nothing To Lose".

Doesn't even deserve half of a star.

Forgettable mid-nineties comedy that did absolutely nothing for Martin Lawrence's career - or for Tim Robinson's for that matter.

Nothing to Lose Quotes