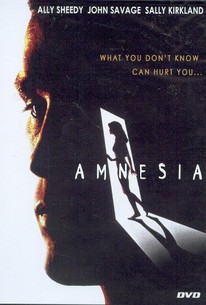 Ally Sheedy, John Savage and Nicholas Walker co-headline this barely released indie feature from 1996, which arrived just prior to Sheedy's shattering onscreen rebound in Lisa Cholodenko's High Art. Walker stars as Paul, a sleazy, philandering pastor in an American small town, married to the soft-spoken and backward Martha (Sheedy) but caught up in the throes of a torrid affair with Veronica (Dara Tomanovich), his stepson's teacher. The two have begun meeting up for illicit encounters at a motel run by the nutty Charlene (famed acting coach Sally Kirkland), where Paul regularly registers under a fake pseudonym - the name of a local boy who drowned in the area years earlier. Eventually, Paul grows so desperate to leave Martha and run away with Veronica that he decides to stage his own death at the lake, but at the last minute he falls, hits his head and slips into amnesia, left with no recollection of who he is. Meanwhile, a slimy insurance investigator named Tim (Savage) crops up with the stated intention of investigating Paul's death, and promptly decides to wheedle his way into Martha's bed.

Richard Fleming
as Minister
View All

There are no critic reviews yet for Amnesia. Keep checking Rotten Tomatoes for updates!

There are no featured audience reviews yet. Click the link below to see what others say about Amnesia!