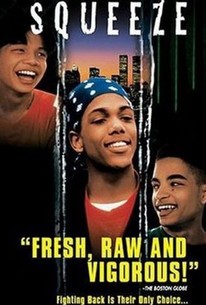 A real-life inner city Boston youth shelter yielded the plot, characters, actors, and director of this urban drama about three ghetto youths trying to make something better of their lives while surviving on the streets. Tyson (Tyrone Burton), Hector (Eddie Cutanda), and Bao (Phuong Duong) are a trio of 14-year-old friends attempting to figure out which direction they'll go in life. As they work at a legitimate job sweeping up at a gas station and attending a youth center with the facility's adult leader J.J. (Geoffrey Rhue), they also run drugs for the local gangsters that mock and taunt their efforts at self-improvement. When one of the boys' mother kills herself, the ensuing crisis leads the three friends to choose different paths. Director Robert Patton-Spruill, a drama teacher at Boston's Dorchester Youth Collaborative, cast the three star pupils from his workshop in Squeeze (1996) and based the film on their real-life stories, bringing a palpable sense of realism to the proceedings.

Sean Henderson
as Bad Kid No. 1

Johnny Henderson
as Bad Kid No. 2

Lynda Patton
as Woman in Car

Georgette Leslie
as Woman in Car

Sparkle Henderson
as Girl with Rake

Nicole Kelly
as Girl with Rake

Melissa Khomblassen
as Girl with Rake

This low-budget indie adds an honorbale panel to a growing body of films (Boyz N the Hood, Meance II Society) on young men facing pressures in the inner city, with the new angle that the clique is multi-ethnic rather than black.

Centers around the difficult coming-of-age of three poor youth on the dangerous streets of Boston.

There are no featured reviews for Squeeze at this time.