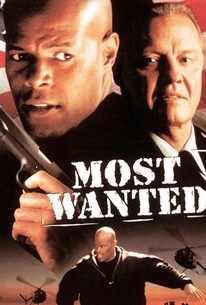 Actor, comedian, and talk show host Keenen Ivory Wayans stars in his own action thriller screenplay about a Gulf War hero who is the patsy in a frame-up. David Glenn Hogan directed this tale of a massive manhunt through the streets of Los Angeles. Sgt. James Dunn (Wayans) is framed for the assassination of the First Lady. Trapped in a conspiracy of revenge and deceit, he must clear his name before he is spotted by the viewers of America's Most Wanted (hence the movie title). Dunn relies on his own survival skills and expert military training to elude those in pursuit, including corrupt Army superiors plus members of virtually every police and government agency. To expose the real killers, Dunn must kidnap an eyewitness (Jill Hennessey) with a videotape of the assassination. But even with the evidience he needs and a hostage complicating matters, he still must deal with a key obstacle-a $10 million bounty on his head.

Michael Marich
as Omega No. 3

Rick Cramer
as Bus Guard No. 1

Kenn Whitaker
as Bus Guard No. 2

Richard Noyce
as Policeman in Hospital No. 1

Jerry Rector
as Policeman in Hospital No. 2

Benny Moore
as Man on Street

L.V. Sanders
as Gangbanger No. 1

Tito Larriva
as Gangbanger No. 2

Mitchell Marchand
as Card Player No. 1

Ernie Banks
as Card Player No. 3

Critic Reviews for Most Wanted

Blandly generic and transparently derivative, pic appears to have been cobbled together from bits and pieces of earlier, better thrillers.

Keenen Ivory Wayans ... is said to have done some of the research for his story on the Internet, which is just one more reason to fear the influence of this technological monster.

Quite simply, Most Wanted is hack work, from every word of Wayans' screenplay to every exposed frame of David Glenn Hogan's direction.

Wayans ... has the physique for action heroics, but he has the soul of a comedian.

Aside from a quirky performance by Jon Voight and a couple of well-executed action sequences, there's little to distinguish this Keenen Ivory Wayans production from dozens of other assassination-conspiracy thrillers.

Throughout the film, we know so little about Wayans' Marine Sgt. James Dunn that we might as well be watching a G.I. Joe doll execute maneuvers.

Wayans looks the action hero: buff, cool, and stoic, but in straying from his normal comedic persona he also strips himself of any charm and personality.

There's nothing hugely wrong with Most Wanted, except that it's painfully predictable and rather unconvincing.

[T]he film isn't as terrible as you might think - it's just bad.

Most Wanted is an overly familiar B-grade action flick...

Audience Reviews for Most Wanted

The professional reviewers don't like this movie as it is just another framed action film. That may be true, but at least it was interesting to watch.

This is a pretty decent action film. As an action movie it wasn't exciting enough. It also failed in an attempt to be a thriller. It really only succeeded in showing that dog food bags can be potential bombs.

This is a pretty decent action film, not heard of it before but it's pretty good if it was a straight to DVD release. The first 10 minutes are almost identical to Shooter released this year and the story is very similar. If you enjoyed that you should like this......any film with Jon Voight as the bad guy is worth watching!!