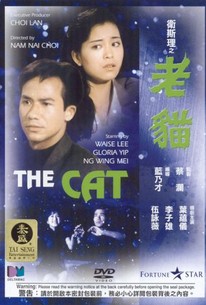 Hong Kong filmmaker Nam Nai-choi (The Seventh Curse) returned with this science-fiction disaster film centering around the popular Asian character Wisely, portrayed here by Waise Lee as a horror writer who discovers a bizarre alien plot. Two aliens come to Hong Kong searching for a pair of ancient eight-sided objects which will destroy the gelatinous monster terrorizing the city. The aliens send their magical cat to get one of the octagons from a museum, but the monster stops it from getting the other one. Thinking that the aliens are also evil, Wisely gets a large dog to chase the cat, leading to an appalling fight between the two animals which -- despite the use of several obvious special effects gimmicks -- also includes real animal violence. The cat finally defeats the dog, although it loses its tail in the battle. When the aliens come looking for Wisely to retrieve the tail, they find that his house has been destroyed by a rogue policeman who was possessed by the blob. The monster grows ever larger, and the cat must join with the second octagon to save Hong Kong in a stupefyingly ridiculous conclusion. Gloria Yip leads a familiar cast including Christine Ng, Phillip Kwok, and the omnipresent Lau Siu-ming.

Christine Ng
as Pai So

This Golden Harvest production is nuts in the best possible way.

This haphazrd combo of horror, sci-fi, mystery, and action is such a botch that even hardcore Hong Kong film fanatics may have trouble sitting through it.

Nothing Special about this movie, Asian Sci Fi is what I would call it, Might keep the interest of someone between the ages of 10-15. A Space Cat comes to Earth to chase away thr evil Monster from outer Space. There is a dog and cat fight in the movie that makes this movie worth watching, Also the Cat has 2 Human Type Friends, a very beautiful girl and a Old Man, Its slow in parts, good subtitles. 3 Stars