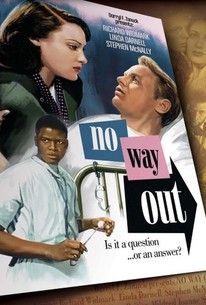 A pioneering film about racial tensions, No Way Out stars Richard Widmark as a criminal named Ray Biddle, who despises African-Americans. Sidney Poitier (in his screen debut) is the black doctor, Luther Brooks, assigned to take care of the wounded Ray. Dr. Brooks, hired by the police hospital as part of an overall program to integrate the staff, keeps his temper in check as Ray spouts his racist invective. When Ray's brother, also wounded, dies in the hospital, the blustering bigot holds Dr. Brooks responsible and sends word to his gang to wreak vengeance on the city's black community. But the blacks turn the tables on the whites and fight them off. Ray then breaks out of the hospital with Dr. Brooks as hostage. His plans to kill the doctor are thwarted by Ray's girlfriend (Linda Darnell), who finally becomes fed up with his blind hatred. No Way Out was considered potent stuff in 1950; it was still regarded as a hot potato in 1962, when NBC dropped plans to telecast the film on "Saturday Night at the Movies."

Will Wright
as Dr. Cheney

Ian Wolfe
as Watkins
View All

News & Interviews for No Way Out

View All No Way Out News

Critic Reviews for No Way Out

No Way Out borrows the template for socially conscious filmmaking from both Gentlemen's Agreement and Crossfire: it's half noir, half sermon.

If you like your movies grim, you'll certainly enjoy this one. Personally, I don't think I want to see another "problem" film for a long while.

Darryl F. Zanuck is to be congratulated for his intentions in making such a movie although his methods do leave something to be desired.

I could not write any further in this review without citing the splendid and breath-taking dramatic work of Sidney Poitier.

The violence of its climax is a bit too wild-eyed to sustain full belief in its sober message, but in other respects this is one of the best (and certainly the most plainspoken) of the films...

What begins in the confines of a hospital soon spills out into the town.

The pic that launched the career of Sidney Poitier.

Audience Reviews for No Way Out

Richard Widmark is a "Negro-Hater" who blames Sidney Poitier for his brother's death. Intense but stylized social commentary featuring a rather nice performance by Miss Linda Darnell.

A really good movie, it's both a serious drama focused on racism and the medical profession, and an exciting thriller with criminals. Poitier and Widmark give great performances.

Three top performances by the leads and a provocative topic make this a very worthwhile viewing experience.

No Way Out Quotes