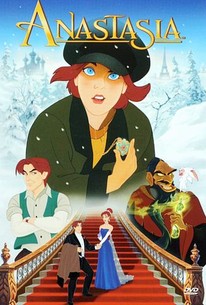 The first feature from the 20th Century-Fox animation unit in Phoenix, Arizona, this is the ninth film produced and directed by the Don Bluth/Gary Goldman duo (An American Tail) and the first animated feature to be made in CinemaScope since Disney's Sleeping Beauty (1959). This $50 million animated fantasy retells the story of Anastasia, daughter of Czar Nicholas, beginning with her childhood in 1916 Russia. After Rasputin's curse on the Romanovs, little Anastasia is separated from her grandmother, the Dowager Empress Maria. After growing up in an orphanage, Anastasia emerges as a young woman called Anya. With no clear memory of her youth, Anya encounters entrepreneurs who seek an Anastasia look-alike in hopes of collecting a reward in Paris from the aged Dowager Empress. Despite demonic interference from Rasputin, the three travel to Paris where another problem awaits: the Dowager Empress is now skeptical of the parade of impostors.

Kelsey Grammer
as Vladimir
View All

The film's strength lies not just with its haunting melodies, pretty pictures and kid-friendly sidekicks, but in an emotionally gripping script.

Anastasia is OK entertainment. But it never reaches a level of emotional magic.

An ambitious, serious but not particularly stimulating musical feature that unconvincingly attempts to graft warm and cuddly family-film motifs onto turbulent aspects of modern history and mythology.

Bluth has rediscovered the ingredients of quality mainstream animation...

A gorgeous piece of work.

It's unable to reach the level of emotional resonance that Disney's string of '90s pictures so masterfully obtained.

As a triumphant return to form after a string of failures, it stands as one of Bluth's finest works.

Overall, Anastasia ends up being a very entertaining animated film.

It is a film that leaves us with an optimistic, albeit somewhat corny, message; love is the most important thing there is, be it familial, romantic or platonic...

It's Bluth and company's skill as artists, as well as some of the better celebrity voice casting in an animated movie of the 1990s, that give Anastasia its merit.

Though the pacing may be off at times--and some moments may feel like Disney-rip-offs--Anastasia is a very well-done animated film, and may arguably be the most stunning film of its genre to grace the silver screen. It also contains one of the most beautiful songs ever written for film: "Journey to the Past," and manages to brilliantly blur the line between animation and real-life. With mostly strong dialogue, thrilling sequences, and a powerful, moving story, Anastasia is a triumph.

Disney adapts yet another old story, this time from Russia. Like all of these movies, they're not entirely accurate, but still they're fun and well made. This is a good one too, I liked it.

I was embarrassed to admit that I found Dimitri hot (as a 20-year-old, mind you!), but then I realized that he was voiced by John Cusack. This somehow made it all okay.

Not Disney but Don Bluth puts together a nice fresh movie with a solid voice cast!