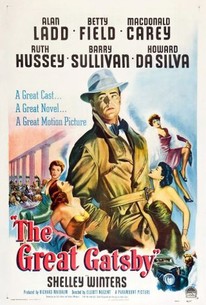 This second film version of F. Scott Fitzgerald's definitive jazz-age novel The Great Gatsby stars Alan Ladd in the title role. Jay Gatsby, formerly Jake Gatz, is a successful bootlegger with aspirations of being accepted in the highest social circles of Long Island. Once he's done this, Gatsby devotes his time to winning back the love of his former lady friend Daisy (Betty Field), now married to boorish "old-money" millionaire Tom Buchanan (Barry Sullivan). Gatsby's obsession with rekindling old flames results in disillusionment and, ultimately, tragedy. Sidelines observer Nick Carraway, the narrator of the original Fitzgerald novel, is expertly played by MacDonald Carey, while Shelley Winters makes an excellent impression as Buchanan's slatternly mistress Myrtle Wilson. Cast as Myrtle's dour optometrist husband is Howard Da Silva, who essayed a minor role in the 1974 remake of Great Gatsby. That 1974 version has unfortunately kept the 1949 Gatsby from being released to television.

Nicholas Joy
as The Guest

Jeanne Romer
as Twin
View All

Critic Reviews for The Great Gatsby

Unfortunately, the movie version misses many of its opportunities.

Elliott Nugent's direction skips along the surface of the era depicted. The script doesn't give him much substance to work with.

Cyril Hume and Richard Maibaum have achieved a dutiful plotting of the novel without the substance of life that made it stick.

This scores over Jack Clayton's lavish and longer 1974 version by the casting of Alan Ladd as Gatsby, so much more convincing as a man with a dark and mysterious past than one-dimensional glamour-puss Robert Redford.

An interesting, film noir-ish take on the novel. The screenplay takes some liberties with the source material but (Alan) Ladd gives an exceptionally sensitive performance as the lovelorn millionaire. Excellent supporting cast.

A large part of what makes this version work is the glacial central presence of Alan Ladd, who's quite convincing as a man with a mysterious past.

Not much is made of the 20s Long Island setting and, like the other film versions, it fails to capture the elusive style of the novel.

Audience Reviews for The Great Gatsby

Ladd is a excellent choice for Gatsby and Shelley Winters perfect for Myrtle but the film is hampered by miscasting in most every other role. The flat look of the film betrays the luxury settings inherent in the book. Not bad but surely not a definitive version.

Not as bad as the 2001 addaption, but not much better.