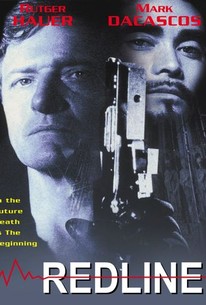 A smuggler is killed by a man he thought was his friend and comes back to tell the story in this sci-fi tinged action drama. John Anderson Wade (Rutger Hauer) is a black marketeer who gets on the wrong side of Merrick (Mark Dacascos), his partner in crime. A disagreement with Merrick turns deadly, and Wade ends up murdered. However, scientists from the Russian government perform experiments on Wade's body that bring him back from the dead; Wade teams up with female kickboxer Marina (Yvonne Scio). and they set out to find Merrick and exact revenge for his brief career as a dead person. Redline has also been released under the titles Deathline and Armageddon.

Levente Lezsák
as Attendant
View All

Even at his worst, Hauer manages to be completely enjoyable.

There are no featured audience reviews yet. Click the link below to see what others say about Redline!