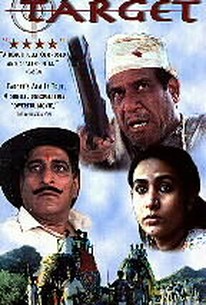 The unjust discrimination that comes with the caste system in rural India provides the basis of this socially conscious drama that centers on the relationship between a cruel, exploitative landowner and his workers who belong to a caste of pariahs. Singh is the lord of his estate. His favorite pastime is big-game hunting, but when his drinking affects his coordination, Singh must hire a shikari (a sharpshooter) to make the kills for him. He pays Bharosa well and gives him a hut in the gangato (the name of the untouchable caste) colony. There, the young hunter finds himself surrounded by discontented workers planning an uprising. Their leader is a cynical young woman, Bijari. At first Bharosa refuses to join them, but after he successfully hunts for the master a few times and still finds himself treated like dirt, he begins to feel great resentment about the humiliation inherent in being a gangato. Things come to a head when Singh, who lusts after Bijari, has her kidnapped. Unfortunately, his henchman did not count on her vigorous resistance, nor did they count on Bharosa who joins in to protect her. Later Singh gets his revenge on the young man by beating him up and ruining his shooting arm. When Singh learns that all his workers are preparing to abandon his land, he leads his gang to the village and plans to burn it. Unfortunately for him, he is met by the furious Bharosa. Violence ensues. ~ Sandra Brennan, Rovi

Ray lacks his father's eye for poetic detail and visual metaphor, but he is a confident director of actors. Agashe's landowner is such a convincing rat that you can almost smell his rancid breath.

There are no featured reviews for Target at this time.