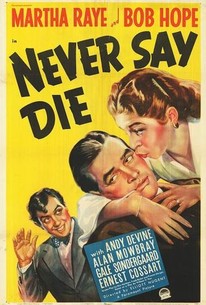 Bob Hope and an all-star cast have great fun in this frothy romantic comedy about a wealthy tycoon who learns that he only has one month left to live. Not realizing that the tests were wrong, he decides to make hay while the sun still shines. He dumps his fiancee and then heads for the lovely Bad Gaswasser Spa in Switzerland. There he meets a young heiress who is being forced to marry a prince rather than the bus driver she loves. Taking pity on her and having nothing to lose, he marries her and plans to leave her his fortune so she will be free to marry anyone she wants. During their honeymoon, on which the bus driver accompanies them, the groom learns that he will live. Unfortunately for the bus driver, true romance has bloomed between the newlyweds. Of course they don't find this out until a little later.

Christian Rub
as The Mayor

Frank Reicher
as Man in Charge of Duel (uncredited)

But the most enjoyable film for weeks has slipped by un- noticed among the heroic and romantic. Never Say Die is consistently absurd...

Has a few sweet spots.

Adapted from the William H. Post play, this film never fully achieves its potential to be a little gem, even with the fine comic talents of Hope.

There are no featured reviews for Never Say Die at this time.