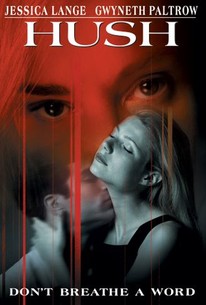 Critics Consensus: A ridiculous but wholly predictable potboiler with performances ranging from comatose to hysterical.

Critics Consensus: A ridiculous but wholly predictable potboiler with performances ranging from comatose to hysterical.

Critic Consensus: A ridiculous but wholly predictable potboiler with performances ranging from comatose to hysterical.

Jonathan Darby made his directorial debut with this thriller, set in Kentucky (but filmed in Orange County, VA). Jackson Baring (Johnathon Schaech) wants his girlfriend, Helen (Gwyneth Paltrow), to meet his mother, Martha (Jessica Lange), so he brings her home for Christmas to Kilronan, their sumptuous Kentucky estate and horse farm. Later, after Helen gets pregnant, they marry and return to Kilronan to have the baby, but Martha aggressively intrudes and manipulates, telling obstetrician Dr. Hill (Hal Holbrook) how to deal with the birth and forbidding Helen from seeing Jackson's invalid granny, Alice (Nina Foch). After learning some of Martha's past history from Alice, Helen soon decides she must make an escape from her demented mother-in-law. ~ Bhob Stewart, Rovi

Hush is gussied up by its classy distaff cast members, but remains trashy all the same.

Jessica Lange establishes a spark of interest in this psychological thriller with her giggly demonic performance. But the film never adds up to anything more than an elaborate tease.

The film is so awful it doesn't even qualify as a B-movie.

The brand names seem trustworthy: Jessica Lange plays the deranged matriarch, Gwyneth Paltrow the pregnant bride. Both are fine actors, but they are stuck in a campy thriller that plays like a Lamaze-class remake of Mommie Dearest.

The screenplay, by director Jonathan Darby and Jane Rusconi, might have prompted Lange to fly way over the top. Thankfully, she reins in her performance sufficiently to save the melodrama from becoming just another Whatever Happended To Baby Jane? lampoon.

The only way that a story this insipid could be any good would be if it was a very campy black comedy.

The screenplay borders on the hilarious, at times, with a couple eliciting guffaws.

If only TriStar had hushed writer-director Jonathan Darby when he made the pitch for this insulting thriller.

Yes, the acting is pretty bad, but I like it.

Engaging in the most minimal way and ending on the most ludicrous note, Hush is one film that both the actors and the audiences are more than willing to forget.

silly mess of a movie