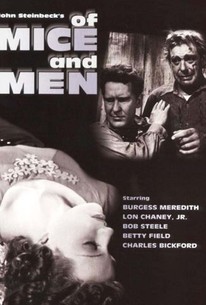 This 1939 film version of John Steinbeck's classic novel was a surprising choice for comedy producer Hal Roach; in fact, Roach had no intention of filming the property until forced to do so as a result of a lawsuit brought by director Lewis Milestone. Burgess Meredith stars as itinerant farm worker George, who travels in with his cousin and best friend Lennie (Lon Chaney, Jr.). George dreams of saving enough money for a farm of his own, a dream shared by the retarded giant Lennie, who merely wants to "tend the rabbits." Unfortunately, George has never been able to stay at a job very long, thanks to the trouble often caused by Lennie's feeble-mindedness. Still, George is fiercely loyal to Lennie and would never think of deserting him. Hired by rancher Oscar O'Shea, George and Lennie run afoul of the boss' belligerent son Curley (Bob Steele); his bored wife Mae (Betty Field) starts flirting with poor Lennie, who, not knowing his own strength, accidentally strangles the girl, leading to even more tragic consequences. Despite being endlessly parodied in Warner Bros. and MGM cartoons ("Which way did he, go George? Which way did he go?") Of Mice and Men retains its raw dramatic power. On its initial release, however, it proved a bit too powerful for many filmgoers, and it lost money. The highly acclaimed American composer Aaron Copland wrote the musical score. The 1981 TV remake of Of Mice and Men starring Robert Blake and Randy Quaid, was a virtual scene-for-scene remake of the 1939 version. The 1993 theatrical remake, starring Gary Sinise (who also directed) and John Malkovich, is perhaps closer to the source than its predecessors, but only time will tell if it attains the classic status of the Lewis Milestone version.

Critic Reviews for Of Mice and Men

This is a magnificent film, which makes a deep impression; but that, in our opinion, should never have been brought to the screen. [Full review in Spanish]

On the indicated level a marvelous job of production, direction, and acting has been done.

The natural state of humanity is to be kind to each other, Steinbeck says - holding George and Lennie up as an imperfect example.

Milestone's version is the most powerful adaptation of John Steinbeck' touching story of two drifters in Depression era America, played by Burgess Meredith and Lon Chaney and brilliantly scored by Aaron Copeland.

A wonderful adaptation of Steinbeck's novel with Lon Chaney Jr. giving a break-out performancel that propelled him to stardom. Cowboy star Bob Steele also gets to show his acting chops in the supporting role of Curley. A winner.

Audience Reviews for Of Mice and Men

The oft adapted Steinbeck novel that many of us probably read in high school English class. In high school English class we watched the version from the 90s starring Sinise and Malkovich. This was the first of any of Steinbeck's novels to be adapted to film. Well-rounded director Lewis Milestone brings the no nonsense Depression era story to the screen with a bunch of character actors led by Burgess Meredith and Lon Chaney Jr.. Meredith and Chaney, in the earliest performances I've seen from either of them, embody so well the migrant worker characters with dreams beyond their mean existence. There is nothing flashy in artistic camera tricks, but instead the gritty drama and character focus is appropriately given the attention it deserves.

No wonder why Lon Chaney Jr. was propelled to stardom after shining as Lennie in this solid adaptation of Steinbeck's good story, as he finds the perfect tone for a mentally disabled character who could have become really irritating if played by a lesser actor.

Burgess Meredith and Lon Chaney both bring the level of gravity needed for one of Steinbeck's best pieces of work. An epic film of an epic work.

This often overlooked version of Of Mice and Men is truly great and seriously underrated. The chemistry between Burgess Meredith's (by the way, it was incredibly weird to see a young Burgess Meredith) George and Lon Chaney Jr's Lenny is truly inspired. Its every bit as heartbreaking as you remember the book to be. The acting's stupendous, as are the direction and photography. Great opening sequence, too. The scene where Candy puts his dog down was irrepressibly sad--almost as bad as the final scene. Of Mice and Men isn't exactly the feel good hit of the summer, but its a damn fine movie.

Of Mice and Men Quotes