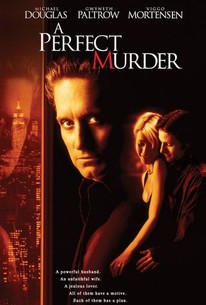 Critics Consensus: A slick little thriller that relies a bit too much on surprise events to generate suspense.

Critics Consensus: A slick little thriller that relies a bit too much on surprise events to generate suspense.

Critic Consensus: A slick little thriller that relies a bit too much on surprise events to generate suspense.

A Perfect Murder is based on Frederick Knott's play Dial M for Murder, filmed by Alfred Hitchcock in 1954. Married to commodities trader Stephen Taylor (Michael Douglas), Emily Bradford (Gwyneth Paltrow) is romantically involved with artist David Shaw (Viggo Mortensen). Aware of this affair, Stephen researches David's past, visits his loft studio, and informs David that he knows about his aliases, jail sentences, and various cons and scams directed at rich women. Then Stephen offers David $500,000 to murder Emily, and David agrees. The plan is calculated to make the murder look like an accident, but events soon go on an unscheduled course. Enter Detective Mohamed Karaman (David Suchet). Knott's original play opened June 1952 in London, followed by a New York run that began October 1952. Several books and sources describe how Hitchcock's film was made in 3-D but neglect to mention that, despite trade screenings in 3-D, Dial M for Murder was originally released in 1954 with ordinary, flat 2-D prints. It was finally shown to audiences in 3-D during the mid-'80s. ~ Bhob Stewart, Rovi

Will Lyman
as Jason Gates

Iris Alten
as Guest at Met

Marion Blumenthal
as Guest at Met

Andrew Sussman
as Guest at Met

Radney Tucker
as Guest at Met

Beverly Tucker
as Guest at Met

Bradford Billet
as Guest at Met

Dexter Brown
as Porter
View All

Critic Reviews for A Perfect Murder

...a fast-paced thriller that probably will leave Alfred Hitchcock aficionados mourning its shallowness -- but not until after they've enjoyed an adrenaline rush.

None of the amusement gained in watching the performances, unfortunately, amounts to much, as the script, in a desperate attempt to lend action interest to the original, static, puzzle plot, compounds surprise turn after surprise turn.

What the film lacks is suspense, surprise (the new ending is a dud) and passion.

A Perfect Murder begins better than it ends, and the pleasures it offers turn out to be more of a transitory nature.

...there's nothing about this thriller to prevent it from soon becoming enmeshed in the memory with others in which Michael Douglas wears a starched collar and grits his teeth.

His [Davis] direction is swift and very effective, and the movie, shot in shades of ebony (the color of black marble), looks exceptionally handsome.

...a briskly-paced and handsomely-shot endeavor that benefits quite substantially from its uniformly strong performances...

A Perfect Murder is a perfectly enjoyable popcorn joyride, and director Andrew Davis gets most of his tactics just right.

slick and twisted tale provides two delicious hours of intrigue and mystery, along with some unexpected wit and black comedy...

...the film is so lacking in anything original that it is hardly worth recommending.

...simpers along with relatively little suspense or thrills...

Audience Reviews for A Perfect Murder

Modern version of Hitchcock movie 'Dial M for Murder'. A rich wife Emily (Gwyneth) has an affair with a shady artist (Viggo). Her husband Steven (Michael) finds out and blackmails his wife's lover into killing her. It would have been the perfect murder but it does not all go to plan. Great cast. Great plot. Viggo actually painted the paintings in the loft.

I really wanted to enjoy this movie. It looks amazing on paper, but it just wasn't anything special. The plot started off quite nice, but became an incredibly cheesy and typical ending. I am extremely sick of movies that have to end with the good guy/girl winning. I think the idea that you can remake Dial M for Murder and make it better or even on par is an utter joke. Even with actors like Michael Douglas and Viggo Mortensen, you can't top Hitchcock.

A very good thriller with a great well established cast. Pity David Suchet didn't get a bit more screen time though. Has some good twists but nothing you don't really expect to be honest. Definitely worth a watch though.