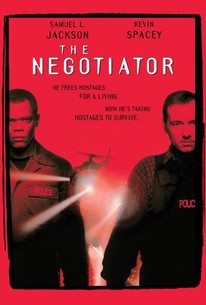 Critics Consensus: The Negotiator's battle of wits doesn't wholly justify its excessive length, but confident direction by F. Gary Gray and formidable performances makes this a situation audiences won't mind being hostage to.

Critics Consensus: The Negotiator's battle of wits doesn't wholly justify its excessive length, but confident direction by F. Gary Gray and formidable performances makes this a situation audiences won't mind being hostage to.

Critic Consensus: The Negotiator's battle of wits doesn't wholly justify its excessive length, but confident direction by F. Gary Gray and formidable performances makes this a situation audiences won't mind being hostage to.

F. Gary Gray directed this suspenseful action thriller based on a real case experienced by police in St. Louis. The James DeMonaco/Kevin Fox screenplay follows an accused man who is forced to commit crimes in order to prove himself innocent of murder. After Chicago police hostage negotiator Danny Roman (Samuel L. Jackson) succeeds in rescuing a little girl menaced by her gun-wielding dad, he's praised by both the police department and the media, and he returns to his usual cop routines with his longtime partner, promising his new wife Karen (Regina Taylor) he'll make it home for dinner every night. Then his partner, who had evidence of embezzlement within the police department, is killed. Since Danny arrives at the crime scene only seconds later, he's the main suspect, and Chief Al Travis (John Spencer) asks him to turn in his gun and badge. Danny invades the Chicago Internal Affairs Division headquarters and tries to get the truth from Inspector Terence Niebaum (J.T. Walsh) while holding two assistants and Commander Frost (Ron Rifkin) as hostages. He then calls for an outsider from another precinct, hostage negotiator Chris Sabian (Kevin Spacey). When Sabian arrives, the two compete for control, while Danny attempts to prove to him that he's been falsely accused. The film is dedicated to J.T. Walsh, who died not long after the production wrapped. ~ Bhob Stewart, Rovi

Donald Korte
as Officer at Funeral

Robert Baier
as Officer at HBT

Ted Montue
as Officer at IAB

News & Interviews for The Negotiator

View All The Negotiator News

Critic Reviews for The Negotiator

Teaming for the first time Kevin Spacey and Samuel Jackson, arguably the two best actors of their generation, in perfectly fitting roles is a shrewd move and the best element of this fact-inspired but overwrought thriller

A hybrid action-drama featuring the choreographed pyrotechnics of director Gray and a battle of words between contrasting hostage negotiators Jackson and Spacey.

To the extent the setup allows Spacey and Jackson to go head to head, it's a good thing. But there are other elements in the film that aren't nearly as interesting or satisfying.

The Negotiator deserves a place among the best action/thrillers of the year. This is a Dog Day Afternoon for the '90s.

"The Negotiator" slogs on for two hours and 20 minutes, and there's hardly a real laugh or a genuine thrill in it.

The movie's a thriller that really hums along, and I was intensely involved almost all the way. Only now, typing up my notes, do I fully realize how many formula elements it contains.

It's not perfect, but it's enjoyable enough to be one of those movies I might stop channel surfing to watch on late-night television.

This highly incredible story lives and dies on its leading performances, so it's a damn good thing someone hired Jackson and Spacey to go toe to toe. [Blu-ray]

...may lack a certain degree of common sense but makes up for it with plenty of excitement and suspense.

What makes this talk-heavy actioner work is the intriguing battle of wits between two formidable, intelligent opponents.

Audience Reviews for The Negotiator

Its a walk in the park for the two leads who enliven this ho-hummer about police corruption and some money missing from the patrolmen's fund. The interesting twist is the battle of wits between two professional hostage negotiaters.

Based on actual events, F. Gary Gray directs this tense action/suspense thriller about Danny Roman- a top Chicago hostage negotiator who, after being framed for murder and suspected of departmental corruption, takes desperate measures to clear his name and discover the truth by taking hostages of his own and forcing a fellow top negotiator from a different district to diffuse the situation. The film does get overwrought and maybe a bit much in terms of believability from time to time, but is nevertheless an extremely suspenseful thrill ride punctuated by solid performances from a great cast. Samuel L. Jackson is tremendous as Roman, and Kevin Spacey is likewise very top-notch as the outsider negotiator Chris Sabian. Those two work well together, and I'd love to see them do more work with one another in the future. J.T. Walsh gives a solid turn in one of his final films as a shady player at Internal Affairs whom Danny takes hostage, and, for comic relief, there's Paul Giamatti as a weaselly informant. And it also doesn't hurt to get solid, if typical work from David Morse as one of Danny's colleagues who is conflicted by how to handle the situation. That's one aspect where the film really shines. The hostage taker knows all the rules and tricks, and the fact that he has a history with the people on the other side (who might also be the people that set him up) make this a real nail-biter at times. Having an outsider come into the situation is also great as he could be more trustworthy in Danny's eyes, but not necessarily. Plus, he's got to deal with Danny's department, who likewise don't know or really trust him. Like I said, the film isn't perfect, but is still very thrilling, extremely gripping, and holds together quite nicely. F. Gary Gray gets crap as a director for being rather contrived and cliched, but when it comes to delivering crowd pleasing entertainment, he's great, and this is a film I really recommend.

Another flixter deletion, I reviewed this a long time ago but it was probably too colorful. The length could be condensed but I think it's one of Samuel Jackson's best movies in a leading role. It has a solid supporting cast and is a prime example of his yelling abilities.

F. Gary Gray is a terrific director when it comes to delivering action, suspense and thrills. He is overlooked as a talented director because his films tend to be "cliched" and "derivative". However I think he's a good director, not great, not excellent, but good. Gray knows how to deliver a good story to the screen, and he most certainly does it with The Negotiator. This is an electrifying film with plenty of action, but more importantly, suspense. The story follows a cop who is accused of killing his partner. His partner uncovered a conspiracy of embezzlement with the police department. Officer Danny Roman must then take matters into his own hands to uncover the truth. He takes a group of people hostage at the Chicago internal affairs division headquarters.The Negotiator is a well crafted action thriller that keeps you on the edge of your seat. The film is not perfect, but it certainly delivers good entertainment. Samuel L. Jackson gives a great performance and so does Kevin Spacey. The plot is very interesting, like I said itr's not perfect, but there are more good things than bad in the film. The acting choices are good, and everyone delivers something unique on screen. I really enjoyed this film and despite the somewhat lackluster bits, theres too much going on that makes up for the bad. For me, The Negotiator is one of Samuel L. Jackson's best films, and he delivers something on screen thats better than most of his other work.