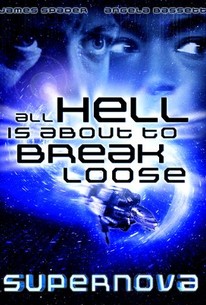 Critics Consensus: This is an insult to the Sci-fi genre with no excitement and bad FX.

Critics Consensus: This is an insult to the Sci-fi genre with no excitement and bad FX.

Critic Consensus: This is an insult to the Sci-fi genre with no excitement and bad FX.

Supernova chronicles the search and rescue patrol of a medical ship in deep space in the early 22nd century and its six-member crew which includes a Captain and Pilot (Robert Forster),a co-pilot (James Spader), a medical officer (Angela Bassett), a medical technician (Lou Diamond Phillips), a search and rescue paramedic (Robin Tunney), and a computer technician (Wilson Cruz). When their vessel, the Nightingale 229, answers an emergency distress signal from a comet mining operation in a distant galaxy, the crew soon finds itself in danger from the mysterious young man (Peter Facinelli) they rescue, the alien artifact he's smuggled aboard, and the gravitational pull of a giant star about go supernova the most massive explosion in the universe.

It's hard to watch Supernova without recalling that wonderful Israeli definition of a camel - a horse that's been assembled by a committee.

A crash course from the start.

Appears headed for a deep-space rendezvous with audience indifference.

If the 20 minutes of deleted scenes on the DVD had been inserted back into the actual film, Supernova would have been much better.

Hill disciples will no doubt find it a fascinating film.

One suspects that most of the people associated with this film will be filled with regret that they ever had anything to do with it.

It's easy to imagine that buried somewhere deep within Supernova there was once a pretty compelling Sci-Fi. The reality however is far less engaging, and significantly duller. James Spader and Angela Bassett are fine in the lead roles, but nowhere near impressive enough to save Supernova from mediocrity.

It looks like very few people like "Supernova." A spaceship that is carrying a crew of people that are involved in the medical field, picks up a mysterious drifter named Karl (Peter Facinelli). Karl is a mystery by himself, but he brought along an equally mysterious space artifact. Will Karl and this strange object prove to be a help to the medical crew, or is danger closer to being the word? I don't see where "Supernova" is that bad of a movie to be honest. Sure, it's bigtime cliched and it doesn't have a spectacular cast or acting (except by Angela Bassett), but nonetheless, it's an interesting movie with good special effects. For awhile at the beginning, it's a little slow paced and not that exciting, but once a certain enemy starts rampaging, "Supernova" gets a lot more interesting. If you like sci-fi movies in the least sense, I recommend at least watching "Supernova." Even though it's not the most original film ever made, it's not that bad. NOTE: That was my Amazon review from the year 2001.