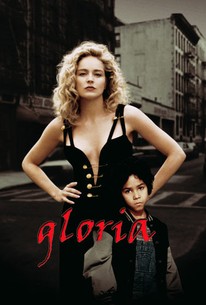 In this film, Gloria is a street-toughened woman sliding into middle age. When the neighbors are murdered by a group of mobsters, one of which is a former boyfriend, Gloria takes the couple's seven-year-old son on the run. In time, she learns why the boy's parents were killed.

James Lally
as Freddie the Pawnbroker

Lillias White
as Transit Cop No. 1

Terry Alexander
as Transit Cop No. 2

Lou Cantres
as Dominican Man No. 1

Jose Rabelo
as Dominican Man No. 2

Nicole Brier
as Young Blonde No. 1

Laura Wachal
as Other Young Woman

Tarantino’s "Grindhouse" to be Funny and Real
Trailer Bulletin: Find Me Guilty

The original is better.

The filmmaker got the raspberries he deserved for trying to outdo Cassavetes's somewhat charming throwaway pic without offering any improvements.

Gloria is another sad example of what happens to old masters when they become too prolific.

Stone doesn't act in this one.

Unfortunately, not a good picture.

The film itself is simply lifeless, with only an occasional laugh popping up here and there so that it isn't completely unbearable to watch.

A mere shadow of the wonderfully gritty original minus all the aforementioned grit. Stone is certainly no Gena Rowlands. Seek out the original and skip this.