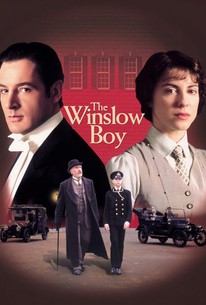 England, 1912. The Winslow family arrives home from church in time for a carefully orchestrated meeting between Arthur Winslow, the proud patriarch, and John Watherstone, the young man set to marry Arthur's daughter Catherine, an ardent suffragette. As plans are made for their lives together, Arthur, his wife Grace, Catherine, her eldest brother Dickie, John, and Desmond Curry, the family lawyer and Catherine's admirer, drink Madeira in celebration of the union. Just after the family toasts, Arthur discovers that his youngest son, Ronnie, is back early from the Naval College at Osbourne--dismissed for stealing a five shilling postal note. Arthur asks his son if he is guilty, explaining "If you tell me a lie, I shall know it, because a lie between you and me can't be hidden." Ronnie swears that he is innocent. Arthur dedicates himself to clearing his son of the charges. After obtaining no satisfaction from the school, he decides to retain the well known attorney, Sir Robert Morton. Since he is a conservative opposed to women's suffrage, Catherine is opposed to hiring Morton. In Sir Robert's chambers Desmond explains their predicament: the legal assumption is that the Admiralty and the Crown can do no wrong and cannot be sued. However, by a matter of grace, such a petition can be granted by the Attorney General, allowing the case to come to court.

Neil North
as First Lord of the Admiralty

Critic Reviews for The Winslow Boy

What began as a transformation of borrowed material by adroit stagecraft has lately become a demonstration of a movie maker's finesse in adaptation.

The real drama isn't about poor little Ronnie, but about the passions he has unleashed in his household -- between his parents, and between his sister and her suitors, declared and undeclared.

An intelligent and very satisfying work of art.

Arthur Winslow and Sir Robert Morton are as ruthless in their way as the real estate salesmen in Mamet's Glengarry Glen Ross are in theirs...

The filmmaking seems to be stuck in 1912.

The Winslow Boy might be triumph of style over substance, but sometimes, like in this case, style is what separates good from bad films.

...for all the craft and care evident in Mamet's movie, it still is a rather bloodless affair, more admirable than engaging.

A thought-provoking and ethically charged tour de force based on Terence Rattigan's 1946 play.

You might have to wait a long time before you find a film with both a family and a lawyer portrayed in such a genuine and likable way.

Mamet trusts in the intelligence of his audience

Audience Reviews for The Winslow Boy

In general, I shun the period pieces but this one needs to be viewed. Here we have a case of a boy from an upper crust family who denies stealing a five shilling postal note and the attempt by his out of touch family to take the matter to trial. While the rest of society sees the coming of war with chills, here we have active lobbying for the poor "Winslow Boy".

Good period drama if a bit studied. The performances couldn't be better though.

Interesting period piece family portrait. Did the boy steal the money? The Winslow family goes through a lot. There are no easy answers. Interesting characterizations by all involved. They were begging for Oscars methinks.