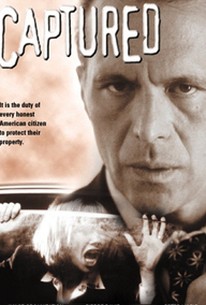 In this taut psychological drama, Nick Mancuso plays Holden Downs, an unscrupulous real estate developer. Joey Breed (Michael Mahonen) is a small time thief who tried to rob Downs and had his arm broken for his trouble. Joey decides to get even by stealing Downs' luxurious sports car with the help of his brother Michael (Andrew Divoff). However, Downs is not willing to give up his car without a fight; he's fitted the vehicle with a variety of security devices and unusual weapons that make it a virtual torture chamber for anyone who sets foot in it without Downs' permission, and the car thieves quickly discover that they've become victims of the man they set out to rob. Captured was the directorial debut for actor Peter Liapis.

...short, fast-paced, and the concept is genuinely interesting.

There are no featured audience reviews yet. Click the link below to see what others say about Captured!