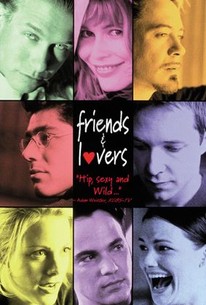 The Christmas holidays are fast approaching when Los Angeles native Ian (George Newbern) gets an unexpected invitation from his father (David Rasche) to join him for a vacation in Park City, Utah. The two don't get along especially well, but Ian goes partly in hopes of patching up the relationship, and partly because his friends figure it would be a nice vacation. In fact, they're so convinced that several of them end up tagging along. Good looking guy Jon (Stephen Baldwin) is determined to seduce good looking gal Carla (an obviously well-cast Claudia Schiffer), despite heavy competition from German ski instructor Hans (Robert Downey Jr.), while David (Danny Nucci) is equally determined to do something about his pesky virginity. Meanwhile, Keaton (Neill Barry) discovers his sister (Suzanne Cryer) is dealing with an unplanned pregnancy, and she wants Keaton to resolve his issues with their father before it's too late. But Keaton has other emotional issues to deal with when he finds out his longtime friend Lisa (Alison Eastwood) wants them to move past friendship into a deeper relationship. This romantic comedy-drama was the debut feature from writer/director George Haas.

Writer-director George Haas' debut feature offers nothing as it strains to be funny and provocative.

An inept farce with the mentality of a tittering 15-year-old boy peering under the bedcovers with a flashlight.

This movie is not merely bad, but incompetent. I get tapes in the mail from 10th graders that are better made than this.

A movie that operates on a level of such staggering ineptitude that its very existence is offensive.

A cold, stupid bore about people with no goodness, just geniality; no inner life, just impulses.

This charmless ensemble comedy starts out amiably enough, but quickly succumbs to the triple handicap of poor direction, a badly written script and some alarmingly excessive performances.

At least Alison Eastwood and Suzanne Cryer are good at getting naked.

The gags and situations are but repetitions and variations on dull, ribaldly worn and reject elementary Farrelly Brothers scribing.

While Stephen Baldwin as headliner is hardly comforting, nuanced performances by Alison Eastwood, Suzanne Cryer, and George Newbern make this watchable at least.

[An] early contender for most inept comedy and worst film of the year.

There is no structure or dramatic tension to the film, which is just a bunch of aimless scenes of people exchanging witless, pseudo-hip dialogue.

For the most part it's a completely worthless movie, but it does contain the complete and utter brilliance of RDJ as Hans. His character is amazing and one of the most hilarious and outrageous bit performances of all time. His nutball German accent and frosted hair is unforgettable. It's a shame the movie couldn't have revolved around him, that would have been something to see. Sadly, this movie is haunted by Stephen Baldwin and an ensemble cast that is anything but good.