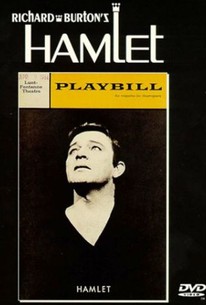 This 199-minute Broadway production of Shakespeare's classic tragedy was directed for the stage by John Gielgud, who also provides the voice of the Ghost. Richard Burton plays the lead in Hamlet, the dramatic and tragic tale of a Danish prince whose obsessive desire for certainty is his ultimate undoing. The entire production was filmed by director Bill Colleran in Electronovision, employing 15 cameras to film the action with no interruptions. Burton gives one of the best stage performances of his career as the ill-fated prince of Denmark.

John Gielgud
as The Ghost

Carol Teitel
as Lords, Ladies, and Attendant
View All

There are no critic reviews yet for Hamlet. Keep checking Rotten Tomatoes for updates!

There are no featured audience reviews yet. Click the link below to see what others say about Hamlet!