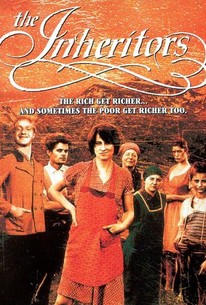 Determined to suppress the peasants' presumption, the local gentleman-farmers band together to thwart the success of the new land-owners. Conspiracy leads to violence, and the cycle of oppression repeats itself. The acting in this film is fierce. Gender issues in particular are given a fiery spin as the women characters refuse the yoke of patriarchal authority. What makes the story so poignant is that the principal villain recognizes the worth of the people he destroys, but will do anything to prevent a challenge to the social order. Ruzowitsky's film laments the loss of life and dignity through class struggle, and though the ending is forseeable, the desperate effort made by the former servants to prosper and enjoy life keeps you riveted.

Eddie Fischnaller
as Florian
View All

Critic Reviews for The Inheritors

This is a memorable, intriguingly complex piece of filmmaking that's worth your time and attention. Don't let the subject matter (or the subtitles) scare you away.

A rowdy, bawdy, and clever morality tale about the elixir of freedom and the eternal clash between the haves and the have-nots.

It is a dark morality tale about the powerful ones acting petty and cruel, while the peasants act with dignity and courage.

The characters lack much depth or complexity. Looking at their clothes is sufficient information to predict their behavior

The director's visual style communicates moral ambivalence in a story that screams for judgment.

Audience Reviews for The Inheritors

There are no featured audience reviews yet. Click the link below to see what others say about The Inheritors!