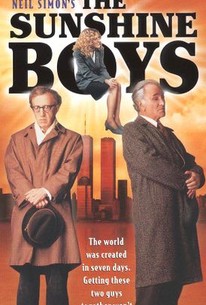 Neil Simon adapted this 1997 comedy from his 1972 play, first filmed in 1975 with Walter Matthau and George Burns as two feuding veteran vaudevillians reuniting to do a television special. For this new version, Simon updated the period and characters into a tale of two comedians (Woody Allen, Peter Falk), once popular in the 1950s. Their successful comedy team split up, but now Warner Brothers wants to bring them back together for cameos in a movie that's "funnier than Home Alone" -- so with salaries of $75,000 each, how can they refuse? Filmed in New York, this movie premiered December 28, 1997 on Hallmark Hall of Fame (CBS).

Critic Reviews for The Sunshine Boys

There are no critic reviews yet for The Sunshine Boys. Keep checking Rotten Tomatoes for updates!

Audience Reviews for The Sunshine Boys

Yuck. This was a pretty bad adaptation for tv. Allen is okay the humor doesn't deliver. Falk just seems cranky and irritating.