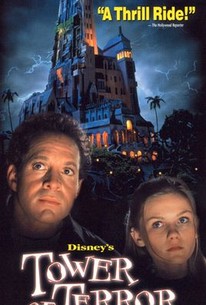 Steve Guttenberg stars in this thriller as a once-respected reporter who has fallen on hard times and is now working for a sleazy tabloid. He happens upon a story that he hopes might put him back in the good graces of better newspapers; in 1939, five people disappeared in an accident aboard the elevator of a luxury hotel. It's believed that their ghosts haunt the old building, and an old woman claims to have the key to their secrets. The cast also includes Kirsten Dunst and Nia Peeples.

Dean Marsico
as Photographer
View All

Critic Reviews for Tower of Terror

Unlike many of Disney's made-for-TV movies, this one stands up. The elevator scenes are genuinely scary-I'm afraid of elevators because of this.

A tightly made fun ghost story for the whole family

Audience Reviews for Tower of Terror

It has that made-for-TV cheese about it, but there is something about the film that I really like. It has a really good story and even though it could have been done a bit better. I enjoy watching Tower of Terror every now and then.

It's pretty funny, and Childesh, but it works out for the most part..lol!~