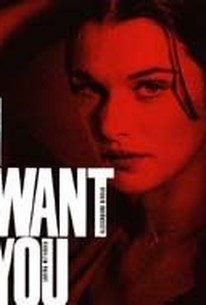 I Want You (Beloved) Photos

This neo-noir British crime drama, set at a decaying English beach resort, begins with a body dropped from a pier. Hairdresser Helen (Rachel Weisz) goes with local deejay Bob (Ben Daniels), but mute bicyclist Honda (Luka Petrusic), who secretly tapes people's conversations, meets Helen at the beachfront and begins sending her flowers. Honda's sad nympho sister Smokey (Macedonian-born Labina Mitevska) sings at a local club. A figure from Helen's past, the enigmatic, mysterious Martin (Alessandro Nivola) checks out Helen but keeps his distance. Irritated that Helen won't sleep with him, Honda plans a way to embarrass Bob with the secret tapes, while Martin and Helen renew their relationship. Polish cinematographer Slawomir Idziak, famed for his filtered filming for Krzysztof Kieslowski's (Blue), captures the dark, visual tone of obsessive love, while Elvis Costello's 1986 song I Want You is heard throughout. Shown at the 1998 Berlin Film Festival. ~ Bhob Stewart, Rovi

Critic Reviews for I Want You (Beloved)

One can so easily see the story's twists and resolution so long before they come.

It mainly holds one's interest because the story is so oddly told.

Audience Reviews for I Want You (Beloved)

I Want You (Beloved) Quotes