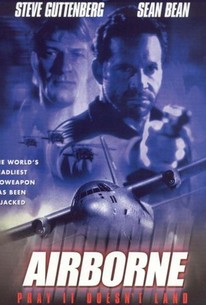 Airborne is a science-fiction fantasy film about the tribulations of a clandestine operation team recruited by the government to steal a deadly virus from a band of terrorists. Led by Commander Bill McNeil, the team confronts the thieves in a daring act of piracy and, after a standoff in mid-air, retrieves the deadly bottle. When two members of the team are subsequently murdered, McNeil suspects that the government might be behind the gruesome act. The team steals the virus back and becomes the subject of a deadly hunt by mysterious mercenaries. Airborne plays like a cross between Mission Impossible and The Rock; Steve Guttenberg, the star of Police Academy and Cocoon, might seem a strange choice as an action hero, but the film in general has entertainment value.

Airborne wants desperately to be a big-time action flick, but with a budget that was apparently lower than an episode of V.I.P., it just doesn't work.

There are no featured reviews for Airborne at this time.